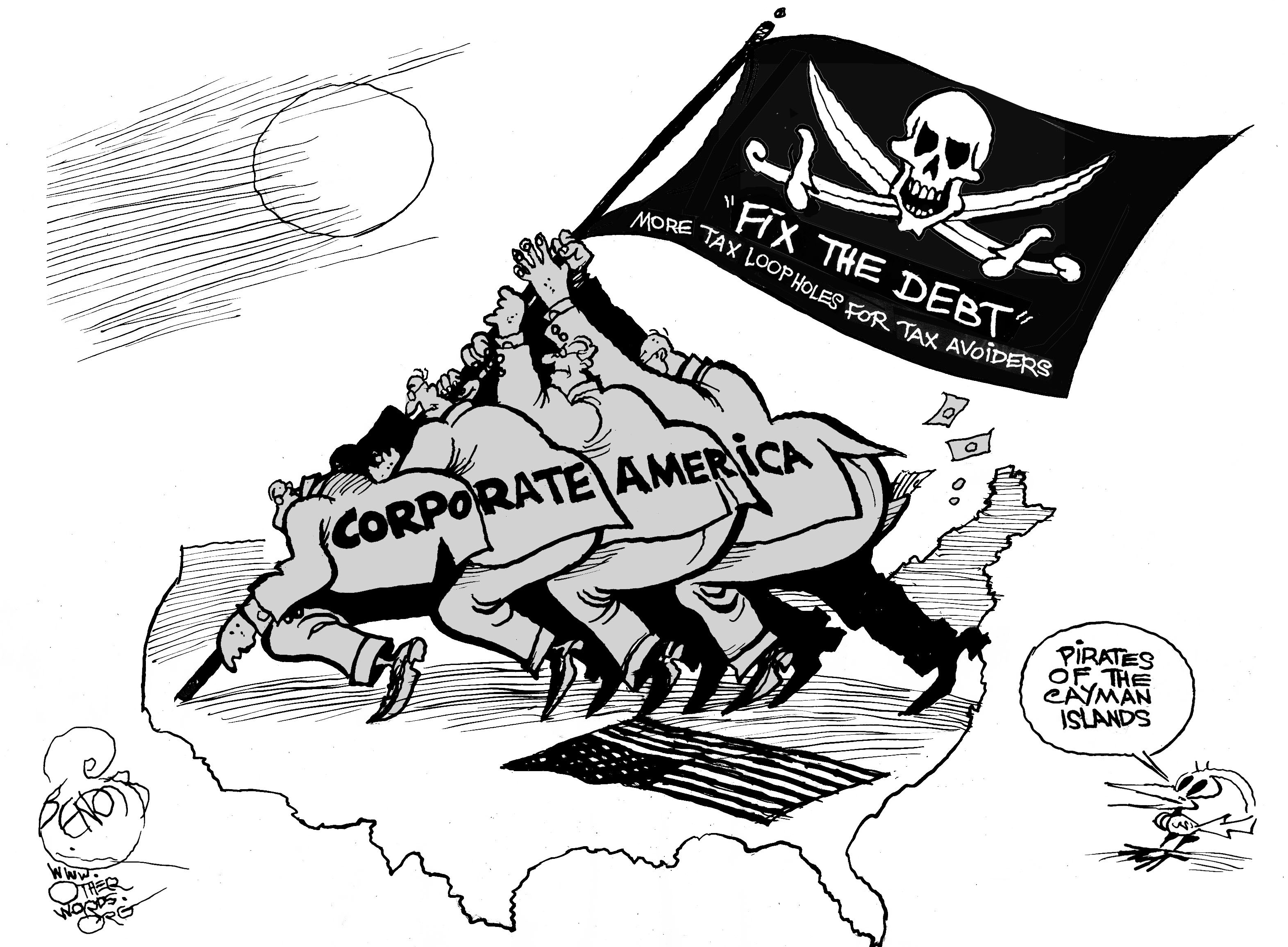 Pirates of the Cayman Islands, an OtherWords cartoon by Khalil Bendib

Instead of gaming the tax system to boost corporate profits, American business leaders need to start investing more in this nation.
By Scott Klinger | June 12, 2013

The swashbuckling pirates of olde amassed private fortunes by raiding ships and stealing them. Once they captured a ship, they would replace its flag — which represented one of the world’s sovereign nations — with the Jolly Roger. By flying the skull and crossbones, pirates proclaimed that they were out for their own benefit and theirs alone.

Many American corporations are following this pirate tradition. Their crews aren’t sword-wielding ruffians, but high-priced lobbyists and accountants. They fight for, win, and then exploit loopholes in the tax code that allow multinational corporations to take profits earned in the United States and legally shift them to tax havens like the Cayman Islands, Ireland, and Luxembourg.

This accounting hocus-pocus allows U.S. corporations to deny the Treasury about $100 billion a year. The money, which could go a long way toward plugging the holes in our federal budget, is tantamount to private booty stashed in a modern-day tax haven cove.

Instead of the Jolly Roger, one of these contemporary pirate gangs flies the so-called Fix the Debt flag. This lobby group has more than 100 corporate ships in its flotilla. Together they’re fighting to cut Social Security and Medicare and to scrap U.S. taxes on their offshore booty, which collectively totals $544 billion.

That’s according to “Corporate Pirates of the Caribbean,” a new Institute for Policy Studies report I co-authored. If Captain Dave Cote of the Honeywell ship, Jolly Jeff Immelt, who commands GE’s vessel, and their pals prevail, together they’ll split a $173 billion tax windfall. 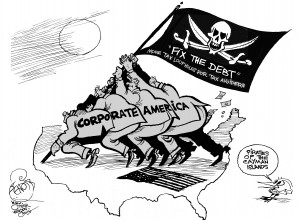 Pirates of the Cayman Islands, an OtherWords cartoon by Khalil Bendib

For the first half of American history, taxes on business activity, like trading, paid most of the government’s bills. As recently as World War II, U.S. corporations stood by our country as corporate taxes accounted for nearly 40 percent of federal revenue. No corporate leaders back then called for tax cuts or complained that high taxes made them uncompetitive. They proudly flew Old Glory outside their businesses and paid to keep the nation strong.

The picture is quite different today. Last year, more than $1.9 trillion of U.S. corporate profits were moored offshore — none of it taxed in the United States. “American companies are now reporting more business profits in Bermuda and Luxembourg than the reported value of all goods and services these two countries produce in a year,” according to a new report published by the government’s non-partisan Congressional Research Service.

In the face of the growing budget deficit, corporate leaders like those in Fix the Debt are demanding federal spending cuts while also calling for even more corporate tax cuts. They’re arguing that they’re needed to make American businesses, already enjoying record levels of profits, stronger still.

Really? Budget cuts advocated by gangs of corporate pirates have forced more than 300,000 laid-off teachers to walk the plank and robbed hungry older Americans of four million meals due to budget cuts in the Meals on Wheels program.

The money lost when corporations avoid their taxes by burying their booty offshore hurts the country they all say they love. But it’s also bad for business. Technology leaders Google and Microsoft both claim they have to look abroad for workers with the skills they need. Perhaps if Google and Microsoft invested in America by paying their taxes, rather than by shifting vast amounts of U.S. profits offshore, our schools would have the money they need to develop the strong math and science programs necessary to compete in a 21st century world.

U.S. business leaders need to back up Cook’s message by replacing the Jolly Roger flying from their corporate flagpole and running up Old Glory instead.

Instead of gaming the tax system to boost corporate profits, American business leaders need to start investing more in this nation, which has done so much to make their companies great.