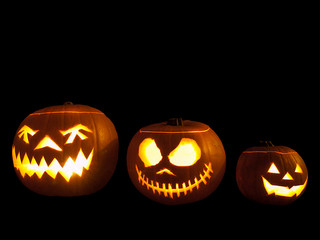 Jack-o-Lanterns Illuminate the Luxury in Our Lives

Did you ever consider yourself lucky because you can carve a pumpkin instead of eating it?
By Jill Richardson | October 23, 2013

Every time I see a jack-o-lantern, I remember a conversation with my friend Kate Chumo. I met her in her home country of Kenya. We were talking about a favorite Kenyan food called uji, a fermented millet porridge.

“That reminds me of what you do with pumpkins at Halloween,” she replied. 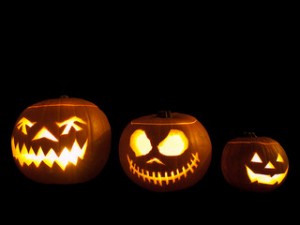 Has it ever occurred to you that we grow piles of pumpkins, which are a food, carve faces in them, and throw them away? We also produce mounds of millet, a nutritious grain that people can and do eat, and feed it to the birds.

That doesn’t make me less likely to carve a jack-o-lantern or fill up my bird feeder. But it does remind me that we are extremely lucky in this country.

Most of the people I met in Kenya had enough to eat. Several had nicer cell phones than I do. Middle class, educated professionals like Kate could easily fit in on the streets of any American city. But their country is not so well off that they mistake food for holiday decorations.

When I first began traveling to countries like Kenya, Bolivia, and the Philippines, I felt lucky every time I came home. My hot shower is a luxury. My drinkable tap water is a luxury. I go through my first days after every trip overwhelmed with gratitude for everything in my life.

I’m not your average tourist, staying in hotels and visiting museums. I stay in peasants’ homes in every country I visit.

At first, I really struggled. I didn’t bring a flashlight to Bolivia because it never occurred to me that the home in the tiny village I stayed at on the shore of Lake Titicaca wouldn’t have indoor plumbing and that I might have to find my way to the outhouse in the dark. In Chiapas, Mexico, I realized that I was lucky to have an outhouse in Bolivia when I asked for the restroom and was told to go behind a tree.

As I continued traveling, my perspective changed. Once I got over the various bathroom arrangements and started packing more appropriately, I realized that I enjoyed the relaxed pace of rural life and the tightknit extended family and community bonds that one finds in a village.

I don’t mean to romanticize poverty. However, I think one can be realistic about the downsides of rural life in other countries while simultaneously appreciating its good points. The richness of walking down tree-lined paths instead of driving on roads, seeing the stars at night, understanding the use of every single plant in one’s environment, eating meals entirely grown on a family’s small farm, and eating three meals a day with extended family — these are pleasures too few of us have in the United States.

When we think of small-scale farmers in the Global South, particularly in Africa, we often view them as I did initially: in terms of all of the luxuries that we have and they lack. And we don’t even know the scope of our luxuries. Did you consider yourself lucky because you can carve a jack-o-lantern in your pumpkin instead of eating it?

Our foreign policy reflects this attitude, aiming to provide for knowledge transfer, from us to them. But doing so without first understanding the wonderful aspects of their cultures that should be cherished and preserved is foolhardy. The exchange should go both ways. We have a lot to learn from them.