When thinks tanks from the left and the right agree on something, Congress should pay attention.
By Sarah Anderson, Chuck Collins | October 10, 2011

A coalition of big businesses is waging a campaign for a massive tax holiday on corporate profits stashed overseas. Its lobbyists claim that this windfall would create millions of jobs. If our lawmakers buy that, they’ve got very short memories.

Just seven years ago, big American corporations made the exact same promises. And Congress gave them a tax holiday that allowed 843 companies to reduce their tax rate from 35 percent to 5.25 percent on $312 billion in offshore profits. 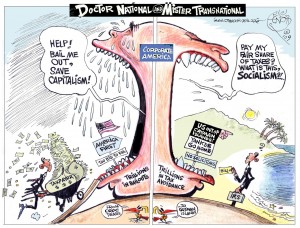 What did Americans get in return? This week, our organization, the progressive Institute for Policy Studies, released a report showing that 58 companies that received 70 percent of the tax windfalls didn’t boost employment. In fact, they actually destroyed a total of nearly 600,000 jobs.

Almost simultaneously, the conservative Heritage Foundation released a paper with the same conclusion: Tax holidays don’t create jobs. When thinks tanks from the left and the right agree on something, Congress should pay attention.

But we’re up against powerful forces.

A coalition called Working to Invest Now in America, which goes by the slick name WIN America, has deployed more than 160 lobbyists and spent at least $50 million to win a tax holiday on more than $1 trillion in offshore funds that might get repatriated if Uncle Sam grants this tax break. Lawmakers in both the House and the Senate have introduced bills that would do just that.

The Senate version, unveiled in early October, would give the deepest tax discounts to firms that create jobs, but that requirement only applies for one year. We need jobs that last, not positions that could vanish after the nation’s supposed job creators get their huge tax windfall.

Some executives argue that without the tax holiday, these global firms would keep their cash offshore permanently, and it’s better for Uncle Sam to get something rather than nothing. Nevertheless, offering such drastic tax discounts sets a dangerous precedent.

Back in 2004, the corporate lobbyists argued that the holiday would be a “one-time” deal. But after they won that round, they turned around and began amassing their offshore stashes once again. They must have counted on getting more tax holidays.

A tax holiday for job destroyers isn’t only a waste of taxpayer money at a time of urgent needs. It hurts small businesses and other firms that operate only domestically. What sense does it make to give global companies deep discounts on their IRS obligations while these small, yet strong, engines of job creation face standard tax rates?

There are many things that we can do to strengthen the U.S. economy and spur job growth. But providing subsidies to companies whose business model is based on minimizing labor costs, sending profits offshore, and dodging taxes isn’t a good strategy. These companies may compensate their CEOs lavishly and deliver value to shareholders, but they aren’t in the business of creating jobs.

The WIN America campaign leader that stands to gain the most is Pfizer. The pharmaceutical giant was the leading beneficiary of the 2004 tax holiday when it toted $40 billion in foreign funds back to the United States.

And what did Americans get for Pfizer’s subsidy? Instead of creating jobs, the firm proceeded to scrap more than 58,000 jobs in the years since that holiday.

Today, Pfizer is holding more than $48 billion in profits offshore. Will Congress be fooled again?

Sarah Anderson and Chuck Collins are among the co-authors of the new Institute for Policy Studies report, "America Loses: Corporations that Take 'Tax Holidays' Slash Jobs."