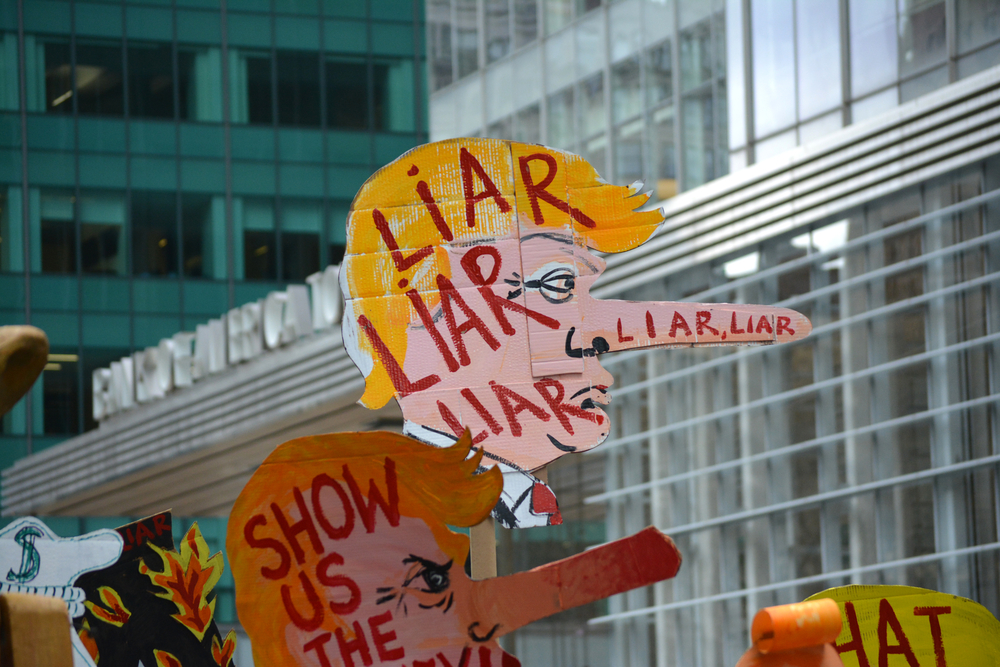 Reporters know the president is telling racist lies to rile up his base. Why won’t they just say that?
By Domenica Ghanem | October 23, 2018

As the GOP’s fears of a progressive wave in November grow, Donald Trump has made it his personal mission to make everyone else afraid, too.

Over the past few week’s he’s been telling evermore fantastical tales of dangerous riffraff inching their way up to the U.S. border.

In reality, there is a caravan of Honduran migrants — fleeing violence and economic strife so bad that they’d risk our own horrific family separation policies — making its way through Mexico. Traveling in the thousands has helped protect the group from the usual dangers of border-crossing, like getting lost or robbed on the way.

Meanwhile, the media has been reporting on Trump’s response.

He’s called them “criminals.” They’re not. They’re desperate men, women, and children forced to flee their homes, many of whom have legally applied for asylum in Mexico.

He’s accused them of being paid for by the Democrats, to increase votes in the midterm elections. They’re not. They’re people fleeing death who, when asked about this by a reporter following the caravan, said they didn’t even know what “the Democrats” meant. (Not to mention that non-citizens can’t vote.)

And recently, he’s warned of “unknown Middle Easterners” in the group.

Reporters from the progressive Mother Jones to the mainstream New York Times assure us these claims are “without evidence.”

As someone who studied journalism myself, I have to say the journalists who stop there are doing the American public a disservice. “Without evidence” leaves the door open to the possibility of evidence. That is to say, these things could be true, but he hasn’t given us any proof.

But we know that isn’t the case. It’s our duty to say flat out: These aren’t just lies, they’re fantasies. They don’t deserve an iota of consideration.

Beyond being unwilling to call out obvious lies, they’re leaving out any reporting on the impact of these words from the president of the United States.

These are lies and they are serving a purpose: to stoke racism and fear among his base ahead of the elections.

This isn’t an accident. He didn’t just forget to use some of his favorite words.

And by letting that phrase sit in a fact-checking article, criticized only for its “lack of evidence,” what journalists are telling Americans is: No, you don’t have to be afraid, because there are probably not Middle Easterners in this group.

It begs the question: if there were, would your fear of them be totally reasonable?

Journalists have a duty to give context, not just to report on whether a sound bite contains truth on a sliding scale. It’s unacceptable not to unpack the racist and xenophobic claims that come out of the mouths of the most powerful.