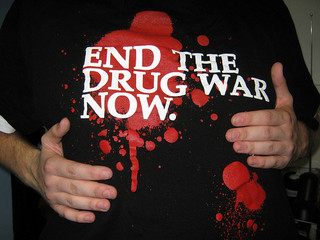 Just Say No to the Drug War

Yes, its momentum has sagged a bit now, what with the Pew Research Center finding that a majority of Americans believe marijuana should be legal. But don’t hold your breath waiting for new national laws.

There’s way too much money and political posturing riding on our outmoded crusade.

Some individual states are starting to say no to the Drug War. Twenty of them, plus the District of Columbia, have already legalized pot for medical needs. Colorado’s and Washington State’s voters have cast their ballots in favor of legalizing it for recreational use, too.

These are smart states that will save a ton of money on police enforcement, court trials, and prisons. And they can tap a new revenue source, too. In Colorado, voters recently approved a measure that will let their state tax pot sales.

On the other hand, legalization is bad news for defense lawyers, corporate prisons, guard unions, and drug cartels. As criminality is reduced by legal definition, the number of criminals decreases with it. This in turn cuts the number of jobs needed to catch, try, defend, and incarcerate fewer people.

Like all boondoggles, the Drug War won’t die quickly or quietly. And not everyone is suffering the brunt of its injustice equally.

Stop-and-frisk laws and racially biased searches, arrests, prosecutions, and incarcerations are tools long-abused by authorities out to keep people of color “in their place.”

Congress, of course, isn’t turning a corner just yet. Lots of lawmakers have built careers on being “tough on drugs.” Before he was busted for cocaine, pleaded guilty, and was sentenced to a predictably lenient one year’s probation, Rep. Trey Radel voted in favor of drug-testing food stamp recipients. The Florida Republican is now on leave. He hasn’t resigned yet, but plenty of politicians lacking his street cred are openly coveting his House seat.

Wouldn’t it help end all this madness if Radel were to stay in Congress? He “could be a leader in backing legislative proposals that would change not just policies but the broader debate about how to end a failed ‘drug war,'” John Nichols suggests in the Madison, Wisconsin, Capital Times.

Nearly 40 percent of the electorate has smoked pot. That’s a huge voting bloc, but it’s hard for pols and cops to change their spots. The moral ground supporting their diatribes is now shifting beneath their feet and one of their own has fallen into the ditch they dug for him.