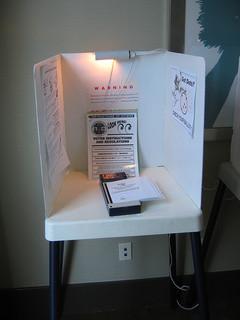 Just Don’t Let the Other Side Vote

Texas won't accept your student ID for voting, but your gun permit will do just fine.
By William A. Collins | October 10, 2012

If in charge,
You’d like to stay;
Keep others home,
On election day.

In some nations, the government is committed to getting everyone out to vote. Some of our states, like California, have special voter protection acts aimed at the same goal. But elsewhere, it seems, the fewer voters who turn out at the polls, the better.

Proponents of stringent voter ID laws claim a need to quell an extremely rare kind of fraud at the ballot box. It’s an odd tribute to the darker side of our Founding Fathers. In our early days, the only eligible voters were white male property owners. Less than a century has passed since Washington enfranchised women, and the Voting Rights Act was enacted just 47 years ago.

The Republican Party is now trying to return to the days when rich white men hogged the vote. Republican leaders sometimes act like enfranchising women, blacks, seniors, youth, and tenants was not such a hot idea. After all, those folks often insist on voting for Democrats.

Hence the right wing’s recent crusade to bar the poor and people of color from the voting booth by imposing unnecessarily strict identification requirements. Not surprisingly, swing states like Pennsylvania, Ohio, and Florida have been the target of these new laws. Thankfully, a Pennsylvania judge blocked the state’s voter ID law from taking effect until after Election Day. 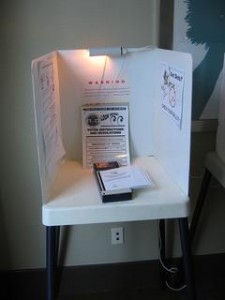 n other critical states, however, such laws have either passed or are still being evaluated.

The best known of these vote suppression gimmicks is the photo ID requirement. Repressive states make it hard or expensive to come by a photo ID. That, of course, is their intention. Don’t have your birth certificate with you? Your immigration papers? Or $100 to get them? Texas won’t even accept your student ID, but your gun permit? Well, of course that’ll do just fine!

Many cases have progressed in court. As with Florida in 2000, the outcome of this year’s presidential race could easily be decided in court. Victory may hinge on the successful suppression of votes instead of the candidates’ strength.

To give you a clearer idea of who the GOP doesn’t want at the polls, 25 percent of eligible blacks and 16 percent of eligible Latinos don’t have a government-issued photo ID. That’s a dramatic portion of minority voters that could turn the election if denied the ability to vote.

This anti-voter crusade has plenty of other wrinkles too. Stern limits on registration drives and absentee ballots are always sold as a protection against fraud, but their real purpose is voter suppression.

I won’t be surprised if the vote for president ends up in court, in a repeat of the Bush v. Gore drama we experienced in 2000. And the Supreme Court isn’t the most reliable place to straighten things out. Justices Antonin Scalia and Clarence Thomas have quietly attended meetings sponsored by the Koch brothers, and Common Cause revealed that Thomas failed to report the $686,000 that his wife “earned” from 2003-2007 for her work at the conservative Heritage Foundation.

Fittingly, state GOP leaders now face allegations in Florida that a firm they hired to register citizens to vote faked some of the paperwork. The North Carolina Republican Party also fired this company, Virginia-based Strategic Allied Consulting, which has been suspected of shenanigans before.

And more trouble is brewing in New Mexico, with the training of so-called “poll challengers.” Protecting ourselves from the Republican voting machine is a bigger priority than saving democracy from those hordes of people without photo IDs.