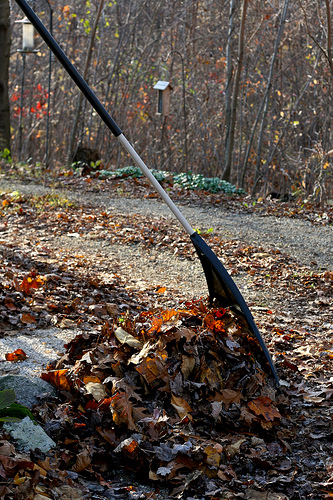 These machines senselessly endanger your health.
By Sarah Anderson | September 10, 2014

When new neighbors moved in next door, I didn’t hold off long before broaching the Big Question.

Even though we live in Washington, D.C., this had nothing to do with politics. For me, neighborly harmony hinges on where folks stand on this divide: leaf blower vs. rake. 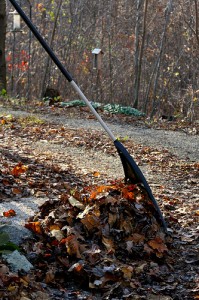 You see, I’m one of those otherwise calm individuals who goes totally bonkers at the sound of a leaf blower. It would be different if this infernal racket served some useful purpose. When I go to the dentist, the drill doesn’t make my blood boil. I accept that without it, my teeth would rot.

When a leaf blower cranks up, I can find no logical justification for my suffering. In a recent article for AlterNet, former Consumer Reports editor Cliff Weathers presents a frightening litany of their multiple hazards.

That’s gross and scary, but the worst part is what these gizmos do to your health. “This toxic cocktail of engine emissions and dust particulates can exacerbate allergies and asthma in children and adults, and aggravate acute pulmonary disorders,” Weathers explained.

The American Lung Association says we should all steer clear of gasoline-powered blowers, the most popular type. So why are they still in use?

For decades now, manufacturers and many landscaping companies have worked to block anti-leaf blower efforts. A favorite tactic: Make it seem like opponents are all extremely rich, and possibly even racist. With low-income Latinos making up a large share of landscaping workers, these are sensitive charges.

It’s true that wealthy white enclaves were among the first to ban blowers. In California, Carmel and Beverly Hills made the move back in the 1970s. But in most of the country, the higher-income set continues to drive demand for these dangerous beasts.

Industry lobbyists downplay the risks while claiming that regulations will lead to higher costs and fewer jobs. But good old non-motorized tools are cheaper than leaf blowers and, according to several tests, nearly as fast.

In his AlterNet article, Weathers cites a competition the Los Angeles Department of Power and Water organized that pitted a grandmother with a rake and broom against a professional landscaper with a leaf blower. Granny gave him a run for his money.

Detailed analysis of the employment impacts of blower bans is hard to find and enforcement is tough. But it’s clear that in California, where about 20 cities, including Los Angeles, have banned blowers, the landscaping industry has hardly collapsed.

About 103,000 Californians are employed in this industry, and landscapers make up a larger share of the workforce there than in other big states like Texas, New York, and Illinois. California’s median wage in this business is $13.75 per hour, more than 20 percent higher than the median in Florida and Texas.

Nationwide, the areas with the highest concentration of landscaping and groundskeeping jobs include some of the hoity-toitiest holiday and retirement spots. No. 1: Nantucket Island and Martha’s Vineyard, where the Obama family vacationed this year.

If a critical mass of these communities banned leaf blowers, it would transform the landscaping industry away from reliance on machines that are senselessly endangering health and welfare — especially for the workers who operate them.

In response to my Big Question, our new neighbors laughed and assured me I didn’t need to worry about which side they were on. This was a relief. But in a city that restricts leaf blower hours but hasn’t banned them, I’m still dreading the fall season.

As in past years, I’ll probably hear three or four machines blasting within a few blocks of my yard, while I — quietly raking — try to maintain my sanity.

OtherWords columnist Sarah Anderson directs the Global Economy Project at the Institute for Policy Studies and is an avid gardener in the Takoma neighborhood of Washington, D.C. OtherWords.org