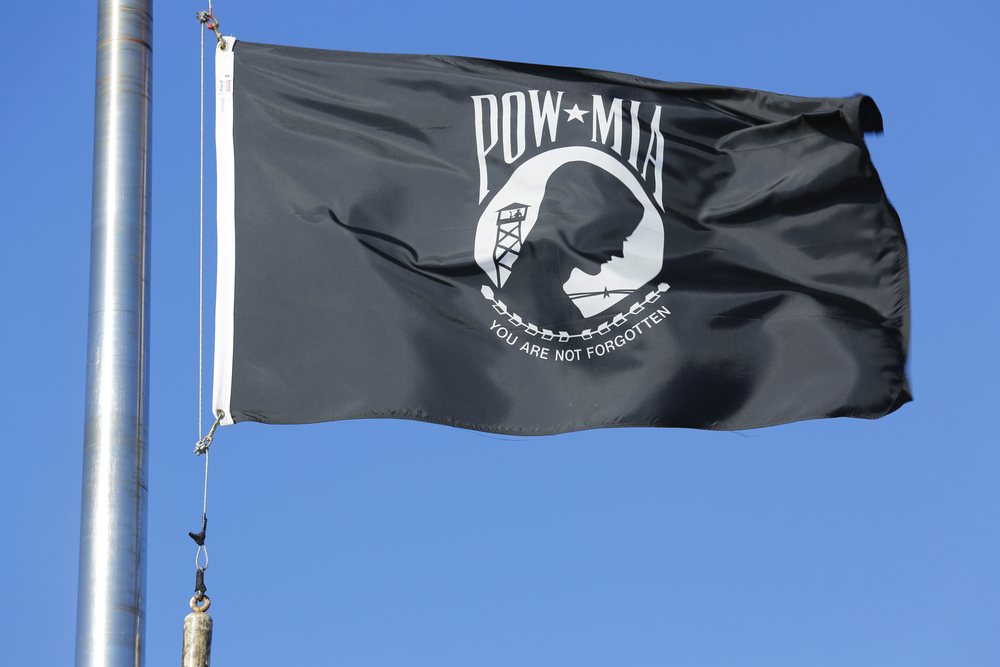 Instead of nursing resentments over wars past, let's take care of our veterans today.
By Kevin Basl | May 21, 2019

You’ve probably seen that black and white POW/MIA flag flying somewhere nearby. The stark banner, dedicated to American prisoners of war and those missing in action, is especially ubiquitous around Memorial Day.

If a new bipartisan bill passes, you may see it more often, year-round.

The bill — backed by Democratic senators Elizabeth Warren and Kyrsten Sinema and Republicans John Thune and Tom Cotton — would require prominent federal properties to fly that flag all year, as opposed to on specific holidays. With its stark image of a war prisoner and the words “you are not forgotten,” it would become the only permanent fixture alongside Old Glory.

I’m a veteran myself. If people choose to fly the POW/MIA flag on private property, that’s their right. However, the controversial history of that flag ought to make us question whether it should be displayed on federal and state properties.

As a teenager, I remember the POW/MIA flag conjuring scenes from Rambo and The Deer Hunter. I pictured gaunt soldiers enduring forced labor and torture thousands of miles away in remote jungle camps. How could the U.S. government leave our troops behind in Vietnam? Why didn’t our military go in and take them back?

This was the very sentiment the flag was meant to conjure. Created in the early 1970s by a group called the National League of POW/MIA Families, the now-iconic image would adorn t-shirts, bracelets, posters, bumper stickers, and more.

The problem? There’s no solid evidence POWs were actually left behind.

Interestingly, the Nixon administration had only introduced the new “POW/MIA” designation several years earlier. All troops “missing in action” were now considered possible prisoners of war. This made it seem like there were more POWs than there actually were.

This helped justify continuing the war until North Vietnam accounted for all POW/MIAs. And groups like the National League of Families, led by relatives of POW/MIA service members, trumpeted the cause.

Yet all known POWs were returned to the U.S. following the Paris Peace Accords in 1973. Several exhaustive studies, including one led by Vietnam veteran senators John Kerry, Bob Smith, and John McCain (himself one of the POWs returned in 1973), turned up no evidence.

Historians like H. Bruce Franklin and Michael J. Allen have written books on the issue, disproving the many theories, sightings, and photographs that have emerged purporting to show prisoners still in Vietnam.

At best, the POW/MIA flag has become yet another ill-informed, if well-intentioned, “support our troops” symbol. At worst, it’s an issue exploited by politicians, subjecting families of service members whose bodies were not recovered to unnecessary emotional hardship.

It foments bitterness toward Vietnam, a country the U.S. normalized relations with over two decades ago. It distracts us from current issues affecting veterans and service members, including homelessness, suicide, poverty, service-linked cancers, and water contamination on military bases.

Instead of making it a law to display a controversial flag, Congress ought to properly fund the VA and fill its over 45,000 staff vacancies so veterans can get the care they need.

While they’re at it, they ought to close the hypocritical, illegal U.S. prison at Guantanamo Bay, where our own county continues to hold detainees without charge or trial.

And they should make sure military families never have to endure another POW/MIA controversy by preventing unnecessary U.S. wars — an urgent consideration as the U.S. stumbles toward wars with Iran and Venezuela.

Instead of nursing resentments over wars past, let’s take care of our veterans today — and stop the wars that lead so many to need care in the first place.

Kevin Basl served in the U.S. Army, twice deploying to Iraq. He’s a member of About Face: Veterans Against the War and Veterans for Peace. Distributed by OtherWords.org.