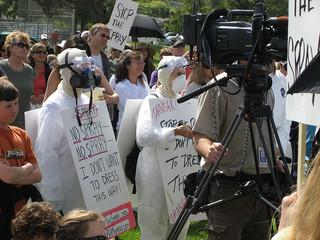 For farmers, fishermen, and consumers working to rebuild the fragile local food economy, a new kind of corn engineered to withstand toxic weedkillers is a disaster.
By Margot McMillen | May 21, 2012

A Pioneer seed saleswoman introduced the first genetically modified crop to my central Missouri county in the winter of 1996 at a University Extension Soils and Crop Council meeting. She told us that if a farmer planted this genetically engineered soybean, then sprayed the herbicide Roundup all over his field, weeds would die but the soybeans would survive.

Farmers were skeptical. What about natural weed resistance to the herbicide, asked one fellow. The answer was the usual “we’re working on that.” This lady was very convincing, and she offered a solution to the common problem of weeds in a no-till field. Until no-till, farmers plowed every year to kill the weeds. That meant erosion — topsoil floating down creeks and rivers to the Gulf of Mexico. With no-till, farmers could plant on last year’s crop stubble without plowing, but weeds were a huge problem.

Sixteen years later, weeds have caught up with the Roundup Ready scheme. More than 20 kinds of weeds are now resistant to Roundup, including the severe allergen ragweed. Even more bothersome for farmers is the problem of resistant crop plants. If you plant Roundup Ready soybeans on a field where you planted Roundup Ready corn the previous year, you’ll have corn plants popping up as weeds in your soybeans.

To the chemical companies, there’s an easy solution to this problem: create new plants that farmers can spray with new herbicides. Corporations patent and sell the seeds they invent, and it’s against the law for farmers to save and re-plant patented seeds. It’s an extremely lucrative business. 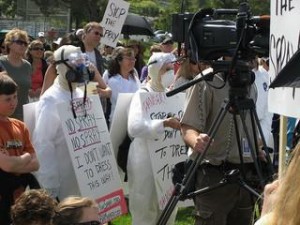 Since Roundup can no longer keep several weeds at bay, Big Agriculture is now altering seeds to resist 2,4-D, another herbicide that is manufactured and sold by a plethora of companies under various names. The biggest winner in this race will be Dow Chemical, whose “Enlist” corn is genetically engineered to resist 2,4-D. Dow made a lot of 2,4-D during the Vietnam War as one of two main components of Agent Orange, a defoliant sprayed over jungles and fields. Three generations later, descendants of people exposed to Agent Orange still suffer from this chemical arms race.

Today, 95 percent of the seeds for corn, soybeans, canola, cotton, and sugar beets are genetically engineered. If you are going to avoid these crops, you’ll have to avoid processed foods altogether while paying close attention to the labels on virtually everything you eat and every piece of clothing you wear.

In farm country, you don’t hear much from the professionals at the extension office or the seed companies about its downsides, but scientists have been studying 2,4-D for 30 years. It has been associated with soft-tissue sarcoma, a rare and frequently fatal cancer. Studies have found associations with hormone disruption, birth defects, lower sperm count, and Parkinson’s disease. In fact, Dow surveyed its own employees and found a 36-percent increase in non-Hodgkin’s lymphoma in workers exposed to 2,4-D. The company somehow concluded that this wasn’t statistically significant.

There are other problems, well documented by the Save Our Crops Coalition. Grapes, timber, and vegetables are particularly susceptible to overspray and drift from one field to another — both of which are inevitable when the powerful herbicide is released behind a moving tractor. So, even though Monsanto, Dow, Syngenta, and other corporations first developed genetically modified corn varieties slated for ethanol and animal feed, farmers will soon have to grow food crops that can withstand 2,4-D too. For farmers, fishermen, and consumers working to rebuild the fragile local food economy, 2,4-D-resistant corn is a disaster.

We’ve had 16 years to learn about genetically engineered crops. That’s long enough to see that the genetic manipulation of our food and cotton crops triggers too many dangerous consequences to continue.

Consumers and farmers must work together to stop 2,4-D-resistant corn before it’s planted far and wide. The USDA’s Advisory Committee on Biotechnology and Agriculture in the 21st Century will meet in late May and this issue is on its agenda. I hope they’ll heed the 365,000 public comments, one letter signed by 36 doctors, nurses, scientists, and other health professionals, and another letter signed by 147 farms, businesses, and nonprofit organizations all opposing this new kind of corn.

Margot McMillen is an organic farmer and a professor of English at Westminster College in Fulton, Missouri. She serves as Missouri Rural Crisis Center’s board representative to the National Family Farm Coalition. Her most recent book is Farming, Food, and Politics in the Heartland. www.nffc.net
Distributed via OtherWords (OtherWords.org)