Without environmental regulations, many companies would gladly poison you to earn bigger profits.
By David Reingold | May 15, 2013

Regulations stink, right? Lots of politicians run on promises that they’ll get rid of them to make way for an economic boom.

Well, have you ever considered what our world would look like without regulations?

In the early 20th century, almost all paint contained lead. Despite many reports documenting the dangers of lead exposure, especially on children, the lead industry did nothing about it. Indeed, it responded by establishing an organization that countered bad publicity with campaigns like an ad depicting Santa Claus encouraging children to paint toys with lead paint. The companies also refused to put labels on their products warning parents not to paint toys and cribs with that toxic product. 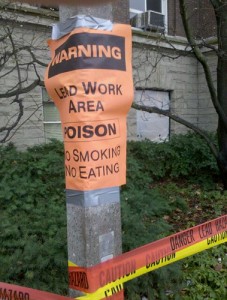 In the 1950s, it took local and state health officials to make the case that lead paint should be banned for interior use. The lead industry fought vigorously against that ban, which we now take for granted. Without regulation, paint would still have lead in it, and our kids would still be dying and suffering from brain damage because of it.

Historians Gerald Markowitz and David Rosner teamed up to document this shameful tale in Deceit and Denial: The Deadly Politics of Industrial Pollution. Their book also tracks a second case of industrial foot-dragging, which involved vinyl chloride. That’s the ever-present stuff that PVC pipes, vinyl siding, and many toys are made from. The plastics industry first learned of animal studies in Italy suggesting that vinyl chloride caused cancer in 1970, but manufacturers hid this information from the public, the government, and their own workers for several years.

When the government found out, regulators proposed that the plastics industry lower the allowed level of exposure to vinyl chloride in its factories. The industry fought that logical measure, claiming that to lower exposure to the suggested levels would cost $90 billion and result in plant closings, job losses, price increases and massive economic dislocation, Markowitz and Rosner wrote. Government regulators overrode those concerns and lowered the permissible exposure level in 1975. The industry quickly found ways to comply with this new standard for less than $300 million, and none of those dire predictions came true. Those plastics manufacturers would never have done it on their own.

The stages of industrial denial are always the same:

Whenever you hear of someone making those claims, whether it’s about fossil-fueled climate change, illness-causing fireproofing additives in furniture, pesticides suspected of making bees die off, the potentially hormone-disrupting antibacterial agents in your soap, or anything else, get skeptical.

Although there certainly are cases where chemicals suspected of being harmful ultimately prove harmless, companies almost always deny the claim that their product is dangerous.

Just remember, in a truly free market, many companies would gladly poison you to earn bigger profits. Predictions of dire consequences if we impose regulations, or benefits if we remove them, rarely come true. And anyone advocating the outright elimination of the Environmental Protection Agency, as several Republican presidential candidates did in our last election, is essentially saying they want to grant corporate America a license to kill.