And now, for some happy talk — by which I mean a non-corporate, “little-d” democratic, and altogether pleasurable economic development that’s spreading across our country. In a word: beer.

More specifically, craft breweries are flourishing from Maine to Oregon, with happy hopheads in town after town now able to boast of their own local, unique, zesty, and fun batch of suds. While Anheuser-Busch (now owned by a Belgian conglomerate) and MillerCoors (partially owned by Canadians) still dominate America’s beer market, sales of the nondescript national brands have soured in recent years. But innovative, small-batch, hometown yeast-wranglers have tapped a burgeoning market of brewski lovers reaching for the real gusto. 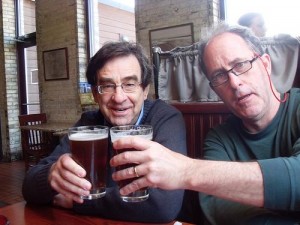 Since 2004, craft beers have doubled their share of the U.S. market. Some 250 upstart breweries opened last year alone, bringing their total number to nearly 2,000. This is a true populist economic phenomenon. Consumers and artisans have found each other and spontaneously created an alternative, locally based economy that helps sustain themselves and their community, rather than having their money siphoned out by far-away profit-takers.

Of course, the big boys are slyly trying to sink their own taps into the craft success of the small guys. Budweiser and Miller, for example, are now marketing pretend-craft beers, having bought such once-local brands as Chicago’s Goose Island and Wisconsin’s Leinenkugel. Unabashed by this consumer deception, however, a Miller spokesman sniffed, “We don’t concern ourselves with what [someone else] defines as a craft brewer.”

Wow — sounds like Miller’s man quaffed one too many mugs of a genuine local beer from San Diego. It’s called “Arrogant Bastard.”