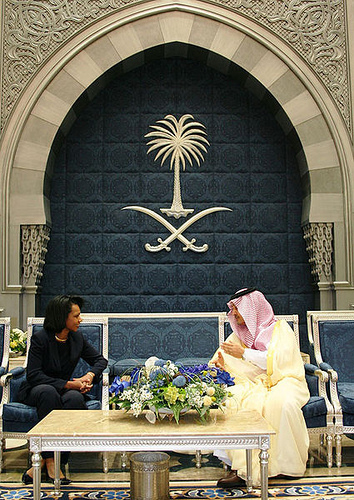 A Loveless Diplomatic Marriage with No Future

It's time for the United States and Saudi Arabia to split up.
By Amanda Ufheil-Somers | April 16, 2014

Among the would-be therapists of the foreign policy world, the alliance between the United States and Saudi Arabia is a textbook case of a “loveless marriage.”

Though the values of the two states are at odds, or so the thinking goes, the great democracy and the absolute monarchy are bound together by mutual interest in the stability of the Persian Gulf, home to almost half of the world’s proven oil and natural gas reserves.

Defenders of this coupling argue that Saudi transgressions—human rights violations, sectarian rhetoric, funding of radical Islamist groups — should be forgiven for the sake of long-term happiness. This strategy amounts to a “never go to bed angry” diplomacy theory.

Along these lines, President Barack Obama’s meeting with King Abdullah in late March was said to be about reassuring the aging potentate that Washington remains committed to the seven-decade “special relationship.”

U.S. leaders will stay faithful, despite disagreements with Riyadh over how to support rebel forces in Syria, the Egyptian junta’s repression of the Muslim Brothers, and the ongoing negotiations over Iran’s nuclear program.

The Saudi regime, meanwhile, is flirting with other powers, such as China, Japan, and India.

Perhaps that’s not such a bad thing.

The U.S. commitment to Saudi dominance in the Persian Gulf has real costs. The kingdom has used its wealth, privilege, and considerable cache of U.S. military hardware to prop up friendly autocratic regimes in the Gulf and beyond.

Saudi Arabian soldiers helped crush popular demonstrations in neighboring Bahrain in 2011. Multi-billion dollar loans to Egypt let the military patch up a weak economy while consolidating its power by imprisoning (or worse) thousands of Muslim Brothers and secular opposition activists.

In Syria, the kingdom continues to fuel the conflict by supplying money and weapons to various anti-Assad militias, and has urged the U.S. to lift its ban on sending anti-aircraft weapons to Syrian rebels.

Despite talk of ending the bloodshed, the Saudi regime views the civil war as a proxy battle in its struggle with Iran over regional influence. Ongoing war may suit Riyadh’s interests even more than a rebel victory. Hints that the Obama administration may be caving to royal pressure on more armaments thus bode ill for Syrians and for the prospects of easing diplomatic relations with Iran.

Unwavering U.S. support has also given the Saudi regime a blank check to suppress — often brutally — any domestic critics. Women, the sizable Shiite minority, and the millions of foreign workers all lack any semblance of equal rights and protections under the law.

It’s hard for Washington to argue that it supports pro-democracy movements in the Arab world when its closest Arab ally is resolutely anti-democratic.

In January, Saudi Arabia expanded its legal definition of terrorism to include any act that disturbs public order or insults the state. As Human Rights Watch pointed out, the law doesn’t even specify that acts must be violent to qualify as terrorist. The wording of the new code is so vague that taking part in a protest or publishing a critical op-ed could now constitute terrorism.

Enforcing violent censorship at home and seeding permanent crises abroad are two dubious pillars of stability. If anything, this witches’ brew of repression and chaos will likely lead to more explosive conflicts.

As with all dysfunctional relationships, the U.S. approach toward Saudi Arabia appears to be driven more by habit than strategy. And it’s irresponsible to look the other way while the regime steamrolls any challenges to the oppressive status quo.

Loveless marriages have no future besides betrayal, bitterness, and despair. It’s time for the United States to part ways with Saudi Arabia.