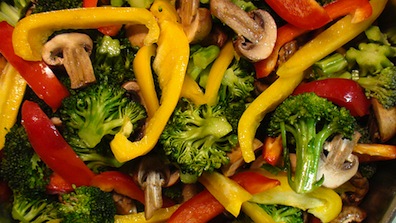 This Low-Carb Diet Is Good for You and the Planet

Can you resolve to reduce your fossil-fuel consumption by eating fewer animal products?
By Jill Richardson | December 27, 2013

2014. A new year. The time to make resolutions. It’s when we all join gyms, sign up for dating sites, and start new diets — only to quit them a few weeks later.

If you’re into resolutions, I’ve got one for you to consider: In 2014, try a low-carb diet. Not a low–carb(ohydrate) diet, but a low-carbon one. As in carbon dioxide, the main greenhouse gas causing the climate crisis.

If you think it sounds a bit strange, hear me out.

Humans produce greenhouse gases several ways. The most obvious one is burning fossil fuels. Heat, air conditioning, transportation, and electricity all fall into this category.

And I’ll be honest. I’d love to reduce the amount of fossil fuels I use. But I have very little ability to make my city improve its public transportation, walkability, and bike paths. Some people can afford major investments like solar panels or even better insulation for their homes, but I can’t. And neither can many other Americans.

But an awful lot of greenhouse gas emissions come from agriculture. Including the impacts of deforestation due to agriculture, getting our food from farm to table accounts for more than 27 percent of global emissions.

The good news: Changing your diet is affordable — even delicious. We all eat three times a day, after all. And a low-carbon diet is actually healthier and often cheaper than what most Americans eat already.

How do you do it? The short answer is “eat less meat.” But please keep reading before you dismiss this as a vegetarian rant.

That’s because we grow enough grain to feed 800 million people, and we feed it all to livestock. Those animals do produce meat, milk and eggs, but they also burn a lot those calories off as they grow.

The amount of calories fed to livestock is far greater than the calories humans obtain from their meat, milk, and eggs. It’s far more efficient for humans to eat plant foods ourselves.

There are also other paths to a lower carbon diet. Choosing locally grown foods, buying organic, gardening, and avoiding processed foods all help. But the simplest, most reliable, and most impactful way to shrink your footprint is by eating lower on the food chain.

This isn’t news. Scientific American wrote about it in 2011, and the United Nations Food and Agriculture reported on it in 2006. Anna Lappe published a book on climate and diet called Diet for a Hot Planet in 2010.

If you aren’t ready to go veg, don’t worry. Baby steps are better than nothing. That’s the idea behind the Meatless Monday campaign. Just avoid meat one day a week. Eat some vegetarian chili or lasagna. Dip veggies in hummus for a snack. Have a bean burrito or munch on fresh fruit.

Personally, I think reducing your animal product intake is easiest if you crowd out meat, milk, and eggs with plant-based food that you enjoy. If you’re busy stuffing your face with crisp apples or roasted butternut squash, you’ll be too full to feel deprived.

Best of all, you’ll help your health as well as the planet. As it turns out, vegetarians and near-vegetarians are 24 percent less likely to die of heart disease than meat eaters. That means a resolution to reduce your meat consumption will help ensure that you’ll be around to enjoy many more New Years to come.