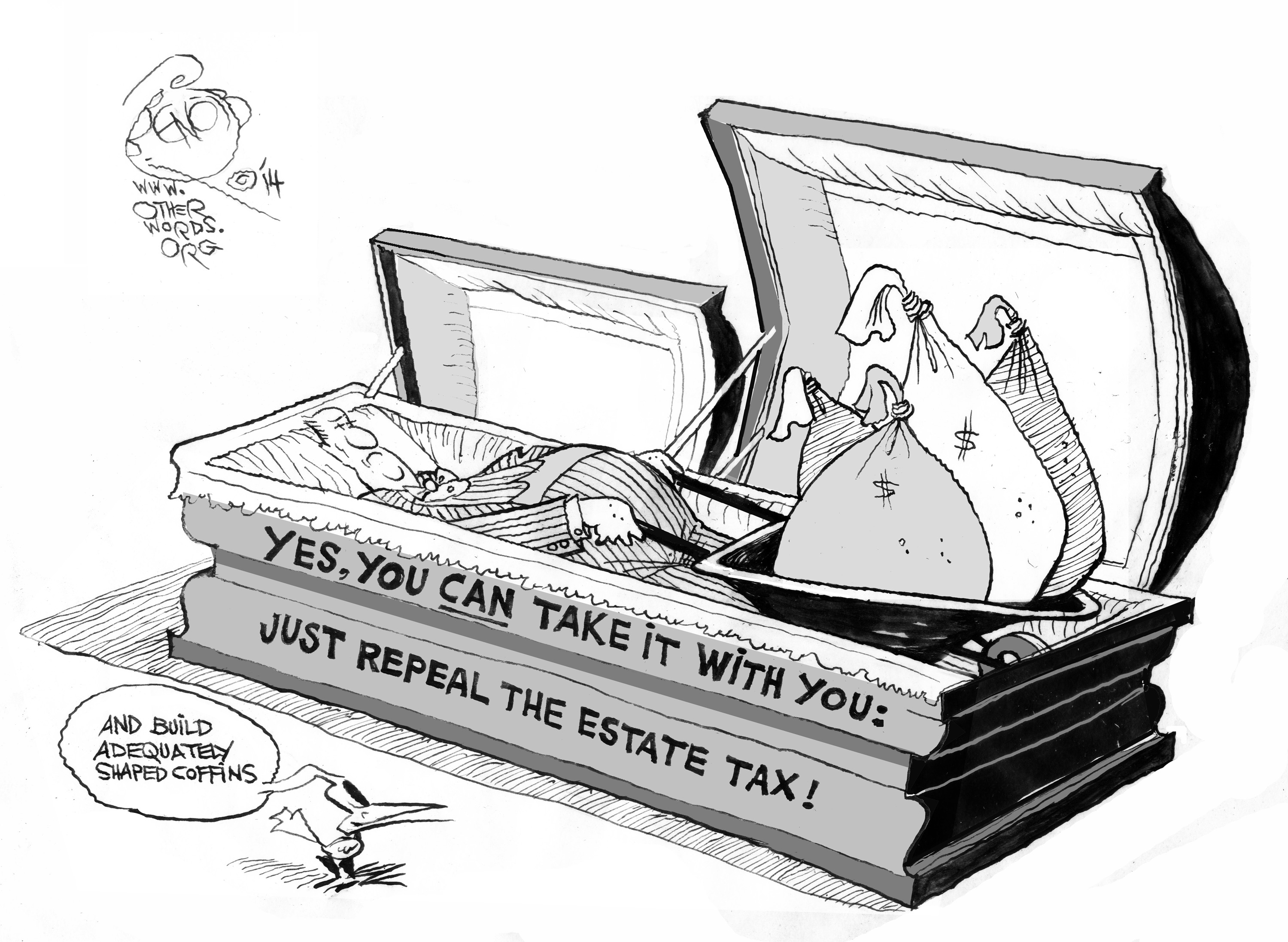 Take Your Loot with You, an OtherWords cartoon by Khalil Bendib

Congress should reinforce the inheritance tax, not scrap it.
By Chuck Collins | July 30, 2014

Real wages have stagnated for decades. Homeownership rates are down. College debt is weighing down young people entering the workforce. Millions of low-wage workers eke by on a minimum wage of $7.25 an hour.

As the American Dream slips away for millions of people in this country, one faction of Congress is doing its best to aid a select group of folks that least needs a helping hand: trust fund babies. 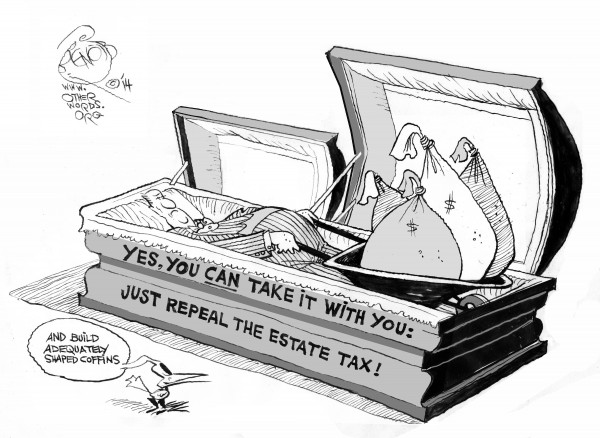 Take Your Loot with You, an OtherWords cartoon by Khalil Bendib

More than 222 House members — nearly all of them Republicans — have co-sponsored legislation to abolish America’s inheritance tax, a levy that only applies to the estates of multi-millionaires and billionaires.

Technically called the estate tax, and derided by its opponents as the “death tax,” this part of the tax code affects only one out of every 500 Americans.

If Congress abolishes it, the already wealthy will gain the privilege of passing unlimited inheritances to their children once they die. Scrapping it would rip a $210 billion hole in the federal budget over the next decade, according to the Tax Policy Center.

The lawmakers determined to kill the inheritance tax go out of their way to hide the facts and pose as populists.

Take Representative Kevin Brady, a Texas Republican and lead sponsor of repeal legislation. He circulates advertisements with two young farm kids next to a pickup trick with the caption, “The Death Tax crushes family farms, ranches and businesses.”

And a Kentucky PAC spent $1.8 million airing a TV ad featuring a farmer who bemoans the burden of the inheritance tax and praises Senate Minority Leader Mitch McConnell (The farmer, John Mahan of Lexington, did not complain about the $405,692 in federal farm subsidies he received between 1995 and 2012).

The inheritance tax “continues to be the number one reason family-owned farms and businesses aren’t passed down to the next generation,” Brady recently (and wrongly) claimed.

It’s hard to fathom how a tax that 99.8 percent of households don’t pay could be a bigger threat to farmers than volatile farm prices and competition from corporate agribusiness. But don’t bank on opponents of the inheritance tax letting the facts muddle their political agenda.

As a strong supporter of the inheritance tax, I’ve seen this playbook before. Between 1996 and 2004, America’s plutocrats, including the Walton and Mars families, invested millions in a propaganda campaign designed to save themselves billions.

They plastered the media with images of farm families, alleging that the inheritance tax would be the “death of the family farm.” The only problem was, when pressed by Pulitzer Prize winning reporter David Cay Johnston, foes of the estate tax couldn’t produce a single example of an actual farm lost because of the inheritance tax. It was a complete myth.

Congress wound up weakening the tax in 2001, when opponents failed to abolish it. Now this tired debate is back, with those phony farm images and fake populism.

Here’s what really matters: Couples with less than $10.6 million in wealth are exempt from the inheritance tax. So are individuals with wealth under $5.3 million.

And the huge family fortunes now being passed onto the next generation are creating a new wave of American aristocrats.

Who are the real faces of the inheritance tax? Try the sons and daughters of the billionaires who make the Forbes 400 list, standing next to their family limousines.

There is a real problem with the inheritance tax: Billionaires are paying expensive lawyers to weasel out of paying it. Casino mogul Sheldon Adelson, for example, used a system of trusts to funnel $8 billion in wealth to his heirs. This maneuver let his family dodge about $2.8 billion in estate taxes that would be due after his death.

Instead of abolishing the inheritance tax, lawmakers should focus on closing the loopholes that empower the richest Americans to legally dodge it.

Chuck Collins is a senior scholar at the Institute for Policy Studies and co-editor of www.inequality.org. He is co-author, with Bill Gates Sr., of Wealth and Our Commonwealth: Why America Should Tax Accumulated Fortunes.Distributed via OtherWords.org