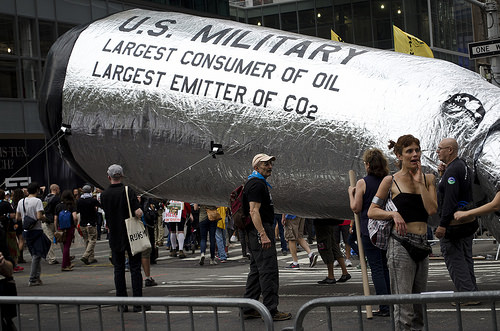 Making Windmills out of Warplanes

The federal government needs to cut military spending to free up the money needed to meet the climate challenge.
By Ellen Powell | September 24, 2014

With the Islamic State’s rise, Libya’s slide back into civil war, and the conflict brewing between Ukraine and Russia, there’s plenty to fear these days.

Maybe you’ve always believed you could count on the U.S. military to protect you from dangers like those, and that makes you feel safe. 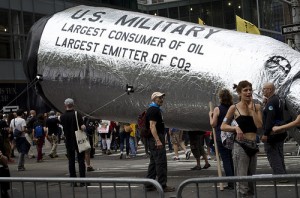 As a college student and a resident of Philadelphia, a city threatened by sea level rise, I’m more concerned about a threat that military force can’t fix and will grow more acute during my lifetime. Namely, climate change.

When I co-authored a new report that compares what the U.S. government spends on military and climate security, it was good to learn that the Pentagon sees climate change as a national security threat. Climate change poses the “biggest long-term threat” facing the Asia-Pacific region, according to Admiral Samuel J. Locklear, head of the U.S. fleet in the Pacific.

This shouldn’t surprise anyone. Extreme weather makes it hard for troops to prepare for missions, rising sea levels could leave many U.S. bases underwater within decades, and the displacement of millions of people causes conflict.

But the Pentagon is part of the problem.

The U.S. military emits more greenhouse gases than any other institution on the planet. It spent $19 billion meeting its energy needs last year, 87 percent of which came from non-renewable, polluting sources.

The $2.4 billion it spent on “green” efforts shows that Defense Department is trying to do something about climate change, but this pales in comparison to its contribution to the problem. Making weapons also burns through huge amounts of energy and natural resources.

National security isn’t just about bombs and warplanes anymore. Conventional force can’t defend any nation against the kind of global warming scientists say is in store unless humanity changes course. Since climate change poses a threat to national security, the federal government should redirect the funds necessary for preventing it from some of the dollars currently funneled into the Defense Department’s coffers.

Experts don’t agree on what meeting the climate challenge will cost — though they all say that the costs are rising every year that the world doesn’t do enough. They’re also divided on how much each nation should pay for the transition away from a fossil-fueled economy.

Whether you look at how much the U.S. government can afford to pay or owes, it works out at about one-quarter of the military budget. With these funds, the federal government could make significant investments in a range of energy efficiency and renewable energy programs.

This doesn’t mean that the American people would become less secure. Some of the funding could come from cutting unnecessary programs.

For instance, phasing out the Cold War-era B-1 bomber would save $3.7 billion over five years, which could be used to reduce energy use in 4.6 million homes by up to 20 percent. Retiring two of the Navy’s aircraft carrier groups would save $50 billion, enough money to provide at least one out of four American homes with a year’s electricity from solar power.

A 25-percent cut to the Pentagon’s budget would leave its funding at about the same level as 2003, when it waged two wars. Defense Secretary Chuck Hagel believes a smaller force would be more agile and effective. Plus, trimming fossil fuel consumption would decrease U.S. dependency on oil imported from volatile regions of the world.

Extreme weather and flooding are already causing havoc in coastal areas as severe drought and wildfires imperil other regions.

It’s time for new spending priorities. The United States needs to cut the military budget to free up money to invest in renewable alternatives to oil, gas, and coal, along with energy efficiency and other steps required to meet the climate challenge.

It’s not going to be easy to keep the planet livable and safe. But we have no time to lose.

Ellen Powell co-authored the recent IPS report Conflict vs. Climate: The Military and Climate Security Budgets Compared. A student at Cambridge University in the UK, she lives in Philadelphia.
Distributed via OtherWords.org