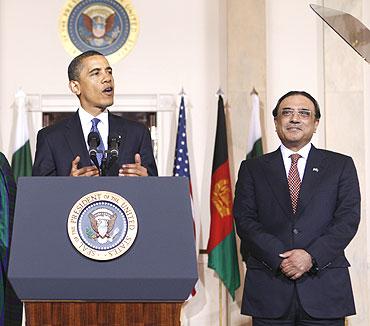 The United States should work to change the game altogether through engaging Pakistan in new ways, including increasing humanitarian aid and supporting stronger democratic institutions.
By Emma Lecavalier | August 1, 2011

Since the covert U.S. operation that killed Osama bin Laden near a Pakistani military installation, the U.S.-Pakistani relationship has rapidly deteriorated. Officials from both countries face increasing political pressure to stand firm in opposition to one another. However, this diplomatic confrontation won’t produce any winners. Undermining U.S.-Pakistani bilateral relations could have drastic implications for the security of the entire South Asian region.

The United States must avoid becoming locked in a paralyzing choice between breaking ties with Pakistan — as many U.S. lawmakers in both parties would like — or continuing to provide Islamabad with unquestioned support. Instead, the United States should work to change the game altogether through engaging Pakistan in new ways, including increasing humanitarian aid and supporting stronger democratic institutions.

Relations are strained, and mutual distrust, which plagued the relationship even before the bin Laden raid, is at the heart of current tensions. The United States has long questioned the murky relationships that Pakistan’s military and intelligence services maintain with local militant organizations. 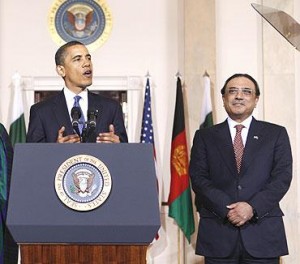 On the other hand, U.S. drone attacks in Pakistan’s remote tribal belt continue to incense the public. Last month, Pakistan’s parliament passed a resolution calling for an immediate end to the strikes, yet the attacks continue. The bombing raids, as well as close ties between the United States and India, especially on matters related to nuclear cooperation, have deepened suspicion throughout Pakistan’s public and its military about U.S. intentions. This has led Islamabad to hedge its bets on both sides of the Afghan War, relying on local militant groups in case of U.S. abandonment.

Pakistan’s internal instability can greatly impact international security because of its location in one of the most dangerous regions in the world. It is bordered by the nuclear-aspirant Iran, nuclear-armed rival India, and conflict-ridden Afghanistan.

To date, Pakistan has been a critical U.S. ally in the war in Afghanistan, providing key supply routes and military support on the Afghan border. U.S. officials often mention the sacrifices Pakistan has made supporting this effort, and it has become increasingly clear that prospects for stable peace in Afghanistan rely as much on Islamabad as they do on Kabul and Washington.

Pakistani intelligence has been and remains central to successful counterterrorism campaigns. Despite accusations of duplicity, Pakistani security forces have drastically increased military operations against groups that are linked to al-Qaeda, such as Tehrik-e-Taliban. With Islamabad’s help, these hostile terrorist groups have been marginalized and largely driven out of Afghanistan. If the partnership were to collapse, years of counterterrorism efforts would come undone, undermining regional stability.

This distrust also breaks down the information sharing crucial to assuring nuclear safeguards and protecting Pakistan’s nuclear arsenal. Pakistan has the world’s fastest-growing nuclear weapons program and is on track to becoming the fourth- or fifth-largest nuclear power. This rapid buildup comes in spite of the country’s internal instability and the mounting sophistication of militants’ attacks on Pakistani military bases. Washington’s recent approach to bilateral relations with Pakistan weakens U.S. efforts to secure nuclear material in Pakistan and around the world.

Islamabad recently sent home two-thirds of the American soldiers training its paramilitary forces, and Washington’s decision to withhold $800 million in military assistance from Pakistan only increases the relationship’s toxicity. The animosity is growing.

But whether they like it or not, Washington and Islamabad must remain grudgingly co-dependent.

Emma Lecavalier is a summer 2011 intern at the Center for Arms Control and Non-Proliferation. www.armscontrolcenter.org