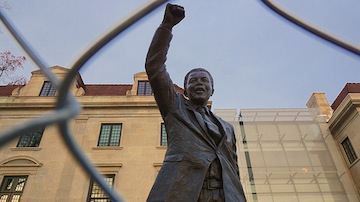 The Power of Reconciliation and Unity

Nelson Mandela made an indelible mark on the United States.
By Marc Morial | December 11, 2013

Nelson Mandela’s heroic struggle for a free, non-racial, and democratic South Africa inspired freedom-loving people around the world but was especially intertwined with the spirit of our nation’s Civil Rights movement.

African Americans felt a special relationship with Mandela, a man who, like Dr. Martin Luther King Jr., endured years of persecution and discrimination in pursuit of freedom and equal opportunity for his people.

“Our victory in defeating apartheid was your victory too,” Mandela, declared during a September 1998 speech in New York City. “We know that our pride in regaining our dignity is shared by you. To you, and to all of the American people who supported the anti-apartheid struggle, we thank you from the bottom of our heart for your solidarity, and for having cared.”

Both Mandela and King were unafraid to agitate for justice and equality and ultimately changed the course of history through the power of reconciliation and unity.

Though King was 11 years younger, Mandela often spoke of his admiration for America’s fallen civil rights champion. Mandela praised King in his 1993 Nobel Peace Prize speech, saying, “It will not be presumptuous of us if we also add, among our predecessors, the name of another outstanding Nobel Peace Prize winner, the late African-American statesman and internationalist, the Rev. Martin Luther King Jr. He, too, grappled with and died in the effort to make a contribution to the just solution of the same great issues of the day which we have had to face as South Africans.”

Twenty-nine years earlier, in his own Nobel Prize acceptance speech, Dr. King had related the American civil rights struggle to the freedom movement in South Africa.

“So you honor the dedicated pilots of our struggle who have sat at the controls as the freedom movement soared into orbit,” Mandela said. “You honor, once again, Chief Luthuli [Africa’s first Nobel Peace Prize winner and Mandela’s mentor] of South Africa, whose struggles with and for his people, are still met with the most brutal expression of man’s inhumanity to man.”

The connections between our struggles didn’t end there. In the 1970s, American youth on college campuses across the country held large anti-apartheid demonstrations, urging the United States to divest its investments in South Africa until the government ended its brutal subjugation of the majority black population.

While I was a student at Georgetown University Law Center in 1981, I co-led an effort to boycott the cafeteria operator because of its investments in South Africa. During this same period, I was a member of the leadership team of the National Black Law Students Association that pushed for divestment of South African investments by U.S. companies.

Early in my career, I was arrested at the South African Embassy as part of a mass, peaceful protest led by D.C. congressional delegate Walter Fauntroy, Mary Frances Berry, and Randall Robinson, in support of U.S. economic sanctions against South Africa.

After years of demonstrations, arrests, and political action, Congress finally passed the Comprehensive Anti-Apartheid Act of 1986.

Sponsored by Rep. Ron Dellums (D-CA) and supported by the Congressional Black Caucus, that law imposed significant economic sanctions against the government of South Africa and was a major factor in the abolishment of the system of apartheid in 1991.

As the world mourns the passing and celebrates the life of Nelson Mandela, America is especially indebted to the great leader for his inspiration and solidarity in our shared struggle for human freedom, equal opportunity, and justice for all.