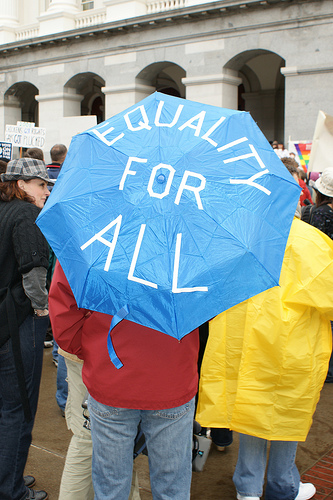 Already, 38 percent of Americans reside in a state that grants gays the freedom to marry or recognizes the validity of gay marriages conducted elsewhere in the nation.
By Emily Schwartz Greco, William A. Collins | December 11, 2013

During his recent bar mitzvah ceremony, Duncan McAlpine Sennett had to chant a biblical passage in Hebrew and deliver a short sermon in English putting that text into perspective.

The Portland, Oregon 13-year-old had an unusual challenge with this routine part of the Jewish coming-of-age ritual. He was chanting the specific biblical passage that prohibits male homosexuality, Leviticus 18:22. And many of his family’s closest friends are gay.

The articulate and plainspoken 13-year-old turned this challenge into an opportunity to show people far beyond his own community that he had acquired a great degree of maturity. He used his five minutes at the pulpit to point out that so-called “traditional” marriage looks nothing like the kinds of unions profiled in the Bible.

Unlike Jacob, men don’t “take” more than one wife anymore. And American women decide whether they want to accept a proposal.

Duncan then voiced his support for marriage equality and honored a gay male couple close to his family who were in attendance. His congregation found it so inspiring that he was asked to deliver his remarks a second time — on camera.

“I’m a very, very strong supporter of equal rights and the freedom of men and women to marry whomever they love,” the Portland teen said in his YouTube-posted remarks, before calling for a referendum on the issue in Oregon next year.

His sermon went viral, naturally. The quest for equal rights for gay Americans has hit critical mass, especially among young people. Duncan’s comments summed up the new normal on this issue.

A majority of Americans support marriage equality now, indicating that the issue has reached what Gallup calls “a turning point.” Already, 38 percent of us reside in a state that grants gays the freedom to marry or recognizes the validity of gay marriages conducted elsewhere in the nation.

Teens and millennials are far more likely to support marriage equality than their elders, polls indicate. As these folks age into the voting majority, there’s no way that marriage equality status will continue to vary state by state.

Maybe by then the Boy Scouts will drop its insistence that troop leaders must still be straight, under penalty of dismissal. The century-old ban on gay scouts will officially end on New Year’s Day.

By contrast, the Girl Scouts have been totally open on gender identity for the past three decades. The right-wing pastors and other arch-conservative blowhards who regularly launch Girl-Scout cookie boycotts to protest this tolerance sure aren’t reaching a turning point in their hate-fueled and futile campaign.

All told, Daisy, Brownie, and other troops sell more than $700 million every year in Thin Mints, Samoas and the like. Along the way, the girls learn about those super-liberal principles of entrepreneurship and self-sufficiency because at least 65 cents of the proceeds from each box of those cookies pays for many of their activities.