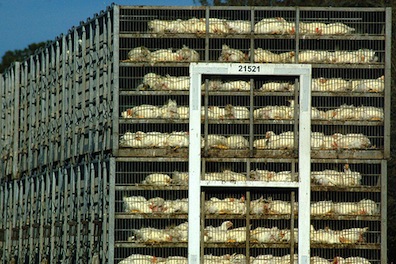 When you have 305 million chickens on the Eastern Shore, that's a lot of poultry waste polluting the Chesapeake Bay.
By Wenonah Hauter | March 5, 2014

Each year, Marylanders pay a small tax that goes toward the Chesapeake Bay Restoration Fund (BRF). Isn’t it fair to expect the poultry industry to pay too?

Maryland Senator Richard Madaleno and Delegate Shane Robinson recently introduced the Poultry Fair Share Act (PFSA). When you have 305 million chickens on the Eastern Shore of Maryland, that’s a lot of poultry waste polluting the Bay.

In early February, Maryland Governor Martin O’Malley was quick to threaten to veto the bill — which had little chance of passing into law — because he thinks he will send a strong message to Iowa ahead of the caucuses that he stands for farmers.

O’Malley has long had a close relationship with Maryland’s poultry industry, but it’s really big chicken companies, not farmers, that O’Malley is lobbying for. And, as the Baltimore Sun recently pointed out, his veto message raised more than just a few eyebrows while questioning why he won’t hold the state’s industry accountable for its waste problem.

The Chesapeake Bay, our nation’s largest estuary and one of the world’s biggest and most biologically productive estuaries, is one of the region’s most vital economic and recreational assets.

Over the past several decades, as the number of factory poultry farms has increased, this historic watershed has suffered a serious decline. Large-scale poultry companies like Perdue create an enormous amount of pollution. Yet the state doesn’t make them clean up the mess that they create or even help cover the cost of this dirty job.

Perdue alone has received over $4.2 million dollars in grants and payments from the state of Maryland since 2008, including $74,000 to Jim Perdue personally.

The Poultry Fair Share Act forces the big chicken companies to make a five-cents-per-bird contribution to the BRF to help with the cleanup and relieve some of the tax burden on working and middle class Marylanders. But some politicians have suggested that the fee would hurt the agriculture industry, a sector they claim is the largest contributor to the state economy.

Really? When you look at Maryland’s biggest industries, agriculture is only a minor player. It accounts for only 0.2 percent in the state’s $300 billion economy, according to the Maryland Department of Business and Economic Development

The chicken industry alone accounts for half of the animal manure loads of phosphorus to the Bay, yet Maryland’s politicians have been bowing to big chicken companies and granting them a free ride to pollute the Bay.

Perdue enjoys annual chicken sales of $4.8 billion but pays nothing into the BRF. But tax-paying Baltimoreans, for example, contribute $60 per year out of their average $23,853 salary to aid Bay restoration efforts. Montgomery, Caroline, Dorchester, Talbot, and Wicomico County taxpayers also pitch in $60 every year.

Some Maryland officials are even considering calling for an increase in the annual BRF fee after doubling it in 2012 because there’s still a shortfall. With Marylanders potentially on the verge of paying even more into the BRF, wouldn’t this be a good time to ask Big Chicken to pitch in?

If the state doesn’t require chicken companies to contribute, Maryland taxpayers will continue to subsidize the industry while Big Chicken pollutes for free.

The PFSA would require poultry companies to cover a chunk of the bill for the Maryland Department of Agriculture’s Cover Crop program. This project is a $20 million per year initiative designed largely to address the massive amounts of excess chicken waste produced on the Eastern Shore where the chicken companies operate. Right now, taxpayers fund this program entirely, including the diversion of funds from the annual $60 tax placed on the state’s septic users.