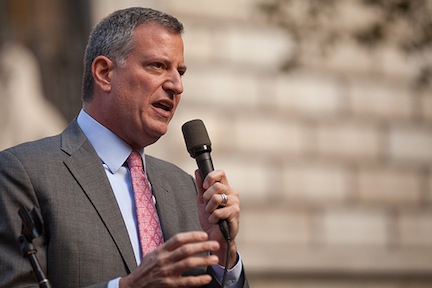 His inauguration returned the Big Apple to its roots as a leader in the fight against economic inequality.
By Marc Morial | January 15, 2014

“We are called to put an end to economic and social inequalities that threaten to unravel the city we love,” New York Mayor Bill de Blasio said at his inauguration. “And so today, we commit to a new progressive direction in New York.”

His inauguration returned the Big Apple to its roots as a leader in the fight against economic inequality. 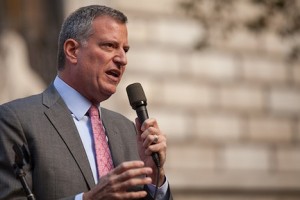 In his inauguration speech, Mayor de Blasio made it clear that he intended to pick up the mantle of former New York progressives like Franklin D. Roosevelt, Frances Perkins, and Fiorello LaGuardia “who challenged the status quo, who blazed a trail of progressive reform and political action, who took on the elite, who stood up to say that social and economic justice will start here and will start now.”

This is welcome news to the overwhelming majority of New Yorkers who swept the new mayor into office in November with 73 percent of the vote.

It’s also good news for the National Urban League, which is headquartered in Manhattan and has led the charge on many of the progressive ideas de Blasio champions.

These include his focus on job creation for all New Yorkers, proposals for more affordable housing, an expansion of community health centers, and reform of New York’s broken stop-and-frisk policy that has unfairly targeted young men of color.

The new mayor also joins the National Urban League and a growing chorus of progressive voices in calling for an end to income inequality. We’re especially encouraged by his plan to ask those earning more than $500,000 a year to pay a little more in taxes to provide the city’s children with a critical educational foundation by funding full-day universal preschool and after-school programs for every middle school student.

A native New Yorker, de Blasio got his start in public service as an aide to New York’s first African-American mayor, David N. Dinkins. He also served in the Clinton Administration as a HUD Regional Director and managed Hillary Clinton’s 2000 Senate campaign. He represented his Brooklyn neighborhood for eight years as a New York City Councilman, and from 2010-2013, he served as New York City Public Advocate, the City’s second-highest elected office.

Running a city the size and complexity of New York is a daunting challenge, made more so by the stark and often competing interests of Wall Street and Main Street. But Mayor Bill de Blasio has rolled up his sleeves and hit the ground running. He even shoveled his own walkway during the city’s first major snowstorm last week.

New Yorkers, hungry for leadership that understands the economic and social challenges they face every day, are hopeful they now have a special champion and kindred spirit in City Hall.