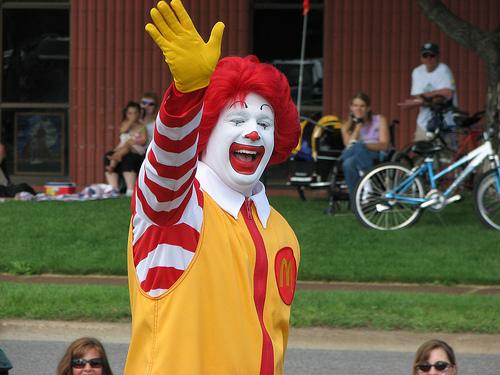 One in three kids is at risk for developing type 2 diabetes as a result of diets high in McDonald's-style junk food.
By Patti Lynn | June 20, 2011

McDonald’s should heed a call from some of the nation’s leading health professionals and stop marketing junk food to kids.

It certainly has good reason to do so. One in three children is at risk for developing type 2 diabetes at some point in their lives as a result of diets high in McDonald’s-style junk food. This generation may be the first in U.S. history to live shorter lives than their parents.

That’s why more than 1,750 health institutions and professionals from all 50 states published full-page newspaper ads across the country in May calling on McDonald’s CEO Jim Skinner to stop targeting kids with its advertising and promotions.

There were also luminaries like the Hollywood-immortalized doctor and clown, Patch Adams, as well as Oprah regular Dr. Andrew Weil. My organization, Corporate Accountability International, led the initiative to publish the ads shortly before the fast food giant’s annual meeting in May, and thanks to an outpouring of support from leading health professionals, we’re still getting the ad published in newspapers.

The letter’s signatories summed up the crisis that McDonald’s has helped create, noting that “today, our private practices, pediatric clinics, and emergency rooms are filled with children suffering from conditions related to the food they eat.”

They pointed to the growing body of evidence, from organizations like the Institute of Medicine to the National Bureau of Economic Research, which shows that kids’ health can significantly improve when companies stop urging them to eat unhealthy food.

McDonald’s, like the rest of the fast food and junk food industry, often tries to get off the hook by blaming the alarming pediatric health crisis on a breakdown in parental responsibility. However, research doesn’t back that argument up. A Yale-Rudd Center study found no authoritative data indicating such a breakdown has occurred. And a Johns Hopkins Bloomberg School of Public Health study concluded that adolescents exercise as much as they did two decades ago, when rates of obesity and other diet-related disease were significantly lower.

So what has changed?

The food children eat and the amount of marketing bombarding our youth. Every year McDonald’s spends at least $400 million on marketing directed at U.S. kids. The comparatively under-resourced prevention and public education initiatives are at a significant disadvantage to compete with such marketing might.

Adding further impetus for McDonald’s to retire Ronald McDonald and other kid-focused promotions were the Sisters of St. Francis of Philadelphia, who brought forward a shareholder resolution at the company’s annual meeting. With support from 13 other institutional investors, the Sisters appealed to the corporation to assess its “health footprint.”

After all, McDonald’s fast food and its marketing are taking a real toll on the public’s health, as the Sisters noted in their remarks. It’s irresponsible for the corporation not to publicly assess this impact.