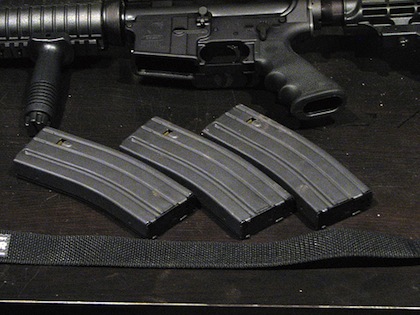 A Colorado gun-accessories company garnered national media coverage when it announced plans to move most of its manufacturing and sales operations to Wyoming and Texas.

The reports highlighted that the company was pulling up stakes to protest the state’s new gun safety laws, which Colorado passed last year. 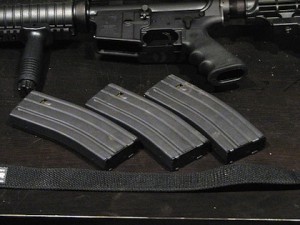 What did the coverage leave out? The fact that the company, Magpul Industries, manufactured the magazine shooter Adam Lanza used when he gunned down kids and adults in the Newtown, Connecticut massacre.

Over the past year here in Colorado, Magpul has taken a leadership role in opposing gun-safety legislation. Among other things, my state has banned magazines holding 30 bullets, like the one used at Sandy Hook.

During the gun-safety debate in the Colorado Legislature, Magpul threatened to take its 200 jobs and flee Colorado if gun-safety laws were put in place.

The company’s executives testified at the same legislative hearings as Jean Dougherty, sister of the slain Newtown psychologist Mary Sherlach. Colorado Republican lawmakers, meanwhile, helped set up Magpul as the face of Democratic “over-reach” on the gun legislation. Those state legislators said this legislation was unpopular, even though polls showed otherwise.

The Republican State Senate leader scolded Democrats for backing legislation that would drive away the company. He pointed out that Magpul magazines were used by Navy Seals in their killing of Osama bin Laden.

At the time, it wasn’t known that a Magpul magazine was also used at Newtown, even though the chances were good, because Magpul makes the most popular brand of 30-round magazine sold nationwide.

After a law limiting magazines sold in Colorado to holding 15 bullets or fewer, Magpul stepped up its political activities, leading a major fundraising event for the recall campaigns against two Democratic State Senators who voted for the new gun laws.

At one fundraiser, the company sold over 15,000 magazines for $10 each, with all the money from sales going toward the recall effort. Eventually, both lawmakers were voted out of office in the recall election.

It was a highly unusual political ride for a private company, especially one with such an obvious vested interest in the outcome. Obviously, companies get involved in politics, especially on the money side, but to take such a high-profile lobbying position at the state level, including involving itself in a recall campaign? That’s rare, if not unprecedented.

But things turned sour for Magpul at the end of last year, when Connecticut police reported that a Magpul magazine was used at Sandy Hook.

After rushing to every microphone in Colorado during the legislative battle, Magpul had nothing to say to reporters about its connection to the Newtown shooting, even when photos of its magazines, used by the shooter, were released in December.

Then, Magpul jumped back into the news last week, when it announced its departure from Colorado.

But even though the company was exacting revenge for a gun law that might have prevented a gunman from having a 30-round magazine had it been in place in Connecticut or nationally, reporters didn’t mention that Magpul’s bullet holders were used at Sandy Hook.

To be fair, journalists could have mentioned that the U.S. military uses Magpul magazines against our enemies, as well as the fact that mass murderers use them at home.

How is this information not an integral part of the Magpul story?