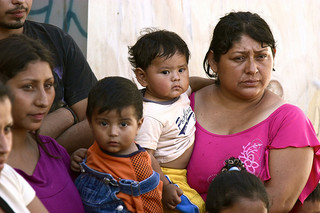 Our nation has a long way to fall before we reach Mexico's level of impoverishment, but some of our lawmakers appear willing to get there faster.
By Chris Schillig | August 28, 2013

As I stepped off a bus in Mexico earlier this month, a tour guide urged my family and everyone else on the trip to go home and tell others that his country was safe.

“Nobody got shot, eh?” he asked, explaining that stories about Mexico as a modern-day Wild West originate in towns just south of the U.S. border, about 27 hours away from the Caribbean beach where we stood.

After all, he noted sadly, we had seen the people of the Yucatán Peninsula, too poor to own guns to shoot anybody. It was a sobering fact driven home on our long ride from our resort to the ruins of Chichen Itza — hovels nestled between rubble, children playing in dirt, flea-bitten dogs baring teeth at passing cars.

At the Mayan ruins, vendors lined both sides of the footpaths, selling trinkets and t-shirts. Goods were arrayed on dusty blankets, on warped boards set across sawhorses, and on clothes lines between trees — all torn down at sunset and carted home until the next day.

We heard often that tourism is vital to Mexico’s economy, the catalyst for thousands of jobs that would disappear if people stopped visiting.

It made me think that evening as I sat down to another meal at the resort, served by smiling employees who pulled out our chairs and placed napkins on our laps. How much sadness lurks behind those smiles, how much food left uneaten on plates is mourned when we stroll away?

Do they feel grateful for the tourism or resentful? Likely both.

Nearly half of Mexico’s inhabitants live in poverty — 53.3 million people, according to a report from the government’s social development agency. Worse, 11.7 million Mexicans live in extreme poverty, which the World Bank defines as earning $76 or less a month in cities and $53 or less in the country.

While tourism may be vital to the country’s economy — amounting to $12.7 billion last year alone — it doesn’t appear that much of that money trickles down to workers who keep the silver polished and the food ladled. Instead, those dollars go to developers and tourist companies who continue to add new resorts and rooms.

Yes, investing in tourism creates jobs. But will those jobs lift millions out of poverty, or will they mostly increase profit margins for already wealthy investors?

It’s a complex problem that we need to address in the United States too. Fifteen percent of us live in poverty. Fortunately, we have safeguards and social programs to assist struggling people, but these aren’t always givens.

Not with people like Representative Markwayne Mullin in Congress. The Oklahoma Republican recently spent time in Arlington, Virginia, scoping out people in line at a grocery store.

Mullin was irritated by the number of shoppers paying for groceries with food stamps. He was particularly irate about one couple that dared to be physically fit while using the assistance.

For Mullin, this is enough to convince him that our system is rife with fraud. Many Republicans agree. Democrats scuttled a House version of the Farm Bill that would have cut the food stamp program by $20.5 billion, a Republican preference. Later, GOP House members sought a $40 billion cut and then approved a symbolic version of the Farm Bill that didn’t include a single dime in food stamp spending.

That legislation has no chance of becoming law. But surely the greatest nation in the world can take care of its financially weakest citizens while providing incentives for new business and jobs.

I left Mexico feeling half-lucky and half-guilty, the way most people feel when they come face to face with poverty. Maybe politicians aren’t most people.

While our nation has a long way to fall before we reach Mexico’s level of impoverishment, some of our lawmakers appear willing to get there faster.

Chris Schillig is an English teacher in Alliance, Ohio. An earlier version of this op-ed ran in the Alliance Review.
Distributed via OtherWords (OtherWords.org)