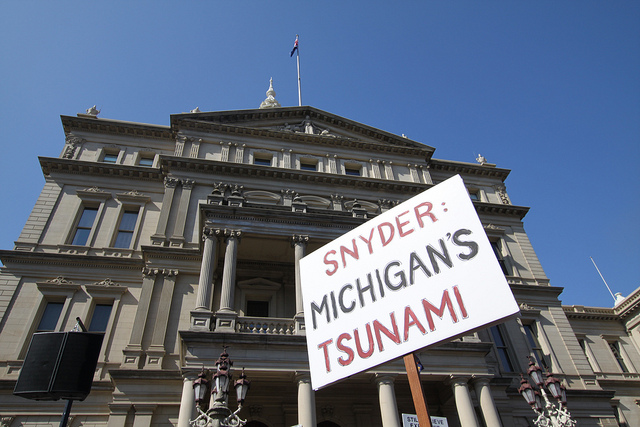 With no warning, no hearings, no public input, no floor debate, and no time for citizens to even know what was happening, Michigan's Republicans rammed a union-busting bill into law.
By Jim Hightower | December 19, 2012

Michigan is no longer a state. It is now “Michiganistan,” an autocratic czardom in the hands of Emperor Rick Snyder.

Formerly the Republican governor, Snyder has been enthroned by the GOP’s lame-duck, legislative supermajority to rule with an iron fist — democracy, rule-of-law, fairness, and the people be damned.

Ironically, voters had given Snyder and his cohort of right-wing corporate ideologues a spanking for this kind of nastiness in a November referendum. The GOP cabal in Lansing had conspired last year to usurp the local authority of city governments and allow Snyder to send in unelected, unaccountable autocrats to fire elected officials and seize control, but last month, Michigan voters overthrew this absurdity. 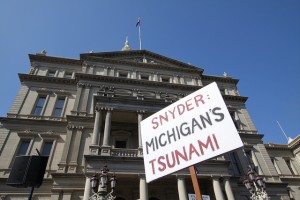 This month, however, Snyder and gang doubled down on their dumbfounding, anti-democratic zealotry. With no warning, no hearings, no public input, no floor debate, and no time for citizens to even know what was happening, the same legislative czarists rammed a union-busting bill into law. Even though he had publicly rejected such a proposal earlier this year as being “very divisive,” Emperor Snyder gleefully signed this measure.

Who’s behind this madness? Say hello to two infamous, anti-union, billionaire plutocrats: the Koch brothers. They had funneled as much as a million dollars into Snyder’s 2010 gubernatorial election, and three Michigan front groups funded by the billionaire brothers aggressively pushed the exact same anti-worker proposal that the Republican thugs just bullied into law.

Two things not long for this world are dogs that chase cars and politicians who deceive and cheat the people. Already, Michiganders are organizing a petition drive for another referendum to overturn the law and return the Czardom of Michiganistan back to democratic rule. Stay tuned.