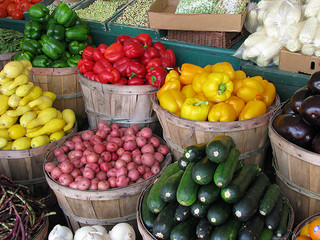 The Farm Bill should expand a pilot program that's alleviating hunger and helping farmers in Michigan and Ohio.
By Nehemiah Rolle | June 26, 2013

The Farm Bill’s recent defeat in the House of Representatives opens up a second chance to get food policy right — including the food aid we give struggling individuals and families. A Michigan and Ohio program could provide some inspiration.

The legislation would have cut $20.5 billion from SNAP, the nutrition assistance program commonly known as food stamps. That turned many would-be Farm Bill supporters into bitter opponents. 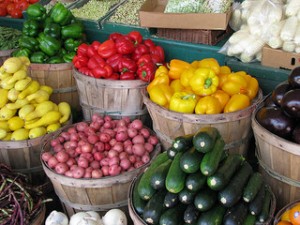 Representative Dan Kildee (D-MI) had hoped to improve the SNAP program for both aid recipients and farmers. His amendment would have extended the reach of Michigan’s successful Double Up Food Bucks program, which stretches food stamp dollars and helps small-scale farmers at the same time.

Here’s how it works. Michiganders on food stamps use their SNAP cards at participating locations. What they spend is matched with Double Up Food Bucks that can be used to purchase up to $20 worth of locally grown fruits and vegetables. That’s a big help to SNAP recipients, who typically run through 90 percent of their monthly benefit within the first half of the month.

The Fair Food Network started Double Up at five farmers’ markets in Detroit in 2009 with a $1 million grant from The Kellogg Foundation. The program has since grown to about 50 farmers’ markets throughout Michigan — and expanded to Toledo, Ohio. Organizers hope to expand to nearly 80 markets within the next three years.

Since the program started, 81 percent of SNAP recipients surveyed said they have bought more fruits and vegetables, and 80 percent of the farmers who have participated report earning higher profits.

Three supermarkets in Detroit that have agreed to stock locally grown produce eligible for Double Up purchases will participate in the program this summer. As it scales up, the effort is nearing the limits of what it can do without federal support.

Kildee’s amendment would have appropriated $5 million per year to help other states launch similar programs.

More than 47 million people receive SNAP benefits nationally, but there are around another 12 million people who are eligible for SNAP benefits who aren’t getting them. Meeting their needs with healthy food, while channeling more business to local farmers, should be a bipartisan goal.

Instead, House Republicans chose a path that is morally corrupt and would make life harder for starving people and the hard-working farmers who would benefit from feeding them. The result was too toxic to muster a House majority.

Now that the House has to concoct a new Farm Bill, we should all urge our lawmakers to include approaches like the Double Up Food Bucks program that reflect our best values and make economic sense.

Nehemiah Rolle is a Roosevelt Institute fellow in residence at the Campaign for America’s Future. OurFuture.org
Distributed via OtherWords. OtherWords.org