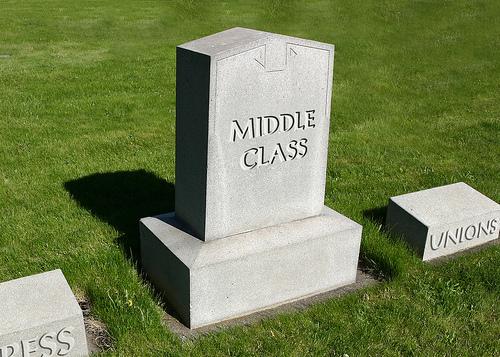 Median family income is sliding, the social safety net is tattered, and only the top 5 percent are making any real monetary headway.
By William A. Collins | October 24, 2012

Yes, my job
Is in the ditch;
But not the incomes
Of the rich.

America is big on fantasies. We savor staged reality shows and overhyped football games. We fawn over celebrities and video games. But perhaps our biggest fantasy is the persistent belief that nearly all of us are middle class. More than 80 percent of us think we’re perched on one of its rungs.

President Barack Obama wants to extend the Bush administration’s supposedly “temporary” tax cuts for the richest members of this imaginary “middle class.” At the high end, that includes families making up to $250,000 and unmarried individuals raking in up to $200,000.

While that kind of cash wouldn’t grant you that famed 1 percent status, it’s plenty for entry into the pretty comfy 2 percent club. Even if you stink at math, it’s easy to see that folks in that tax bracket earn way more than what passes for middle class in a country where the median household income in 2011 was just $50,054. 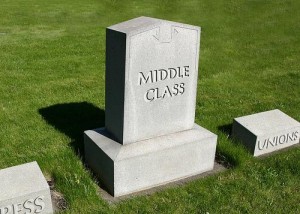 Meanwhile, down at the bottom of the range, very few people care to admit that they’re poor — even when they really are. That’s especially the case if their families were once a part of the middle class and they’re among the 7.8 percent of us now unemployed. Since you can’t even claim to be working class if you don’t have a job, you might as well continue your middle class fantasy and hope for the best.

Sadly, wishing won’t make it so. Median family income is sinking, the social safety net is tattered, and only the top 5 percent are making any real monetary headway. Manufacturing jobs have been flown overseas or handed to robots. Benefits are diminishing while paychecks are stagnant or shrinking, and unions are the target of carefully orchestrated assaults by the government and other big employers.

All the while, members of the investor and management classes are doing just swell. Greed has achieved its just reward and the limits of conscience on unseemly income have been repealed. Taxes have been lowered on the wealthy and social disapproval of spending excesses has faded.

At the same time, the Supreme Court has sided with big corporations, assuring that the rules will continue to favor profits over labor for a long time to come.

The most striking aspect of this fast-growing chasm between the haves and have-nots is just how slow Americans are to complain about it. Even though our democracy is crumbling, we still do have the power at election time to throw out the rascals who make up these rules. But we don’t.

Instead, we cling to the notion that hard work and pluck are still the keys to success. Maybe we all believe in the tooth fairy too.