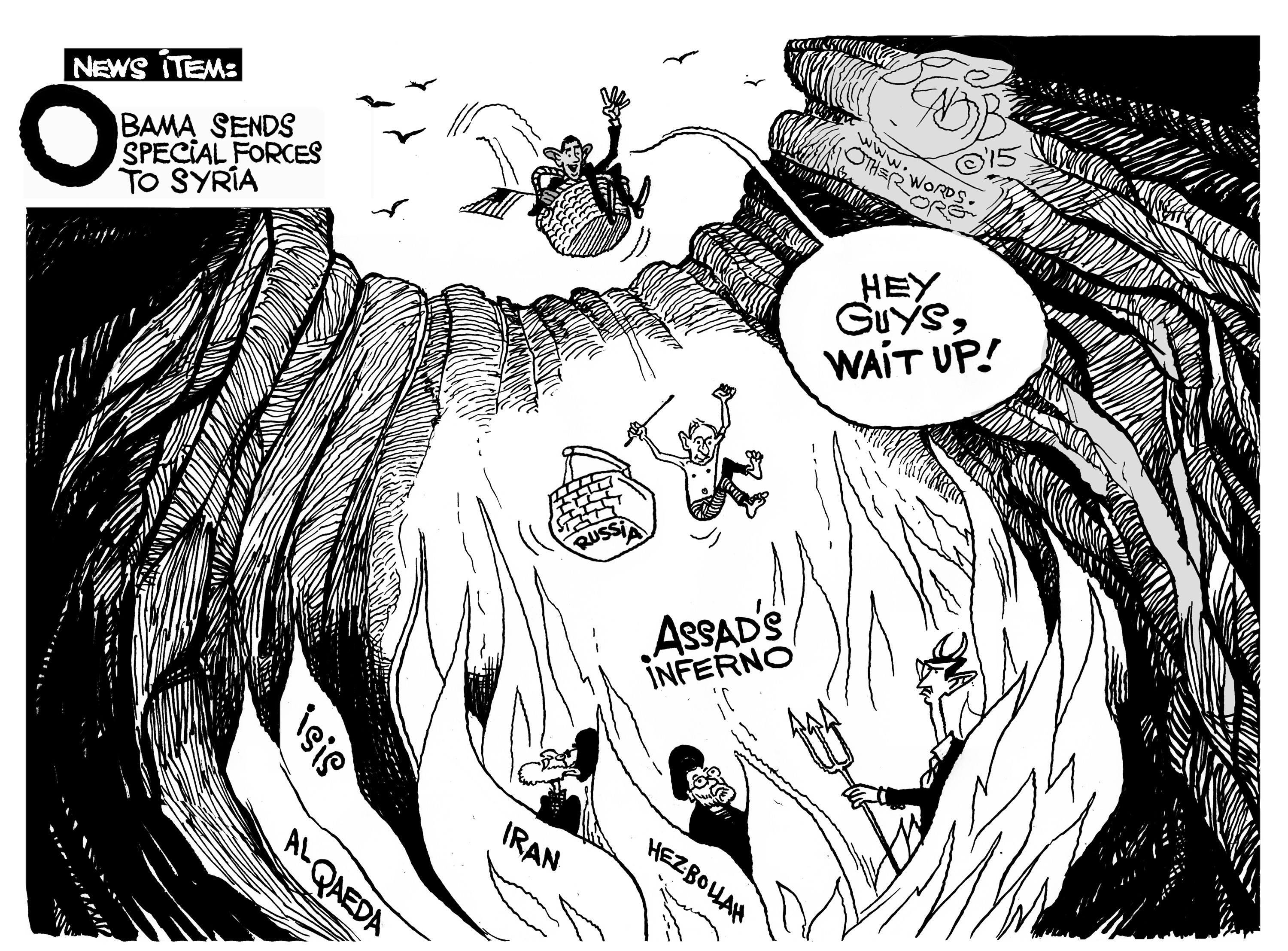 Going to Syria in a Handbasket, an OtherWords cartoon by Khalil Bendib

Military Intervention Is the Problem, Not the Solution

The Islamic State's latest atrocities are a calculated effort to bring the war in Syria home to the countries participating in it.
By Peter Certo | November 18, 2015

A café. A stadium. A concert hall. One of the most horrifying things about the murderous attacks in Paris was the terrorists’ choice of targets.

They chose gathering places where people’s minds wander furthest from unhappy thoughts like war. And they struck on a Friday night, when many westerners take psychic refuge from the troubles of the working week.

The message was simple: Wherever you are, this war will find you.

The same could be said for the 43 Lebanese civilians murdered only the day before, when a bomb exploded in a crowded marketplace in Beirut. Or for the 224 vacationers who died when their Russian airliner blew up over Egypt a few weeks earlier.

The Islamic State, or ISIS, claimed responsibility for each of these atrocities. But that’s not the only thing they have in common. In fact, all of them occurred in countries whose governments — or, in Lebanon’s case, a powerful militia — have gotten involved in Syria. 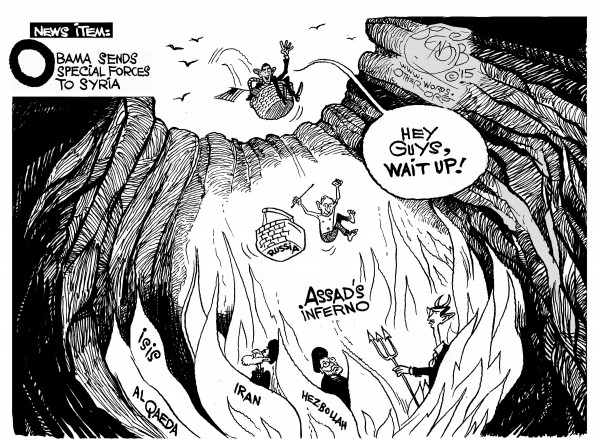 Going to Syria in a Handbasket, an OtherWords cartoon by Khalil Bendib

Russia started bombing ISIS targets and other Syrian rebels last month. Hundreds of Lebanese Hezbollah fighters have fought and died defending the Syrian regime. And France was the first country to join the Obama administration’s war on ISIS last year.

Indeed, scarcely a month before ISIS attacked the French capital, French planes were bombing the Islamic State’s capital in Raqqa, Syria — dropping bombs that “did not help them at all in the streets of Paris,” as a grim communiqué from the terrorist group gloated afterward.

These horrific attacks on civilians are part of a calculated effort to bring the war in Syria home to the other countries participating in it. And our bill could come due next.

Washington’s funneling millions of dollars’ worth of weapons to its proxies in Syria. It’s dispatching special forces to “advise” an array of the Islamic State’s enemies. And in an air war totally unauthorized by Congress, U.S. warplanes have launched thousands of strikes on alleged ISIS targets in Iraq and Syria since 2014.

But you can’t simply bomb extremism out of existence. And as governments from Moscow to Paris to Beirut are learning, you put your own people’s lives on the line when you try.

Military intervention has succeeded mightily in breaking things and killing people, but it’s done nothing to wind down the greatest factor fueling the rise of ISIS: Syria’s wider civil war. An international arms embargo and a deal between the Syrian regime and other rebel groups — jobs for diplomats, not drones — would go much further toward curtailing the threat of ISIS.

Yet France has responded to the carnage in Paris by pounding Raqqa with yet more air strikes — reportedly bombing medical clinics, a museum, and a stadium of its own, among other targets.

Hillary Clinton declared that ISIS “must be destroyed” with “all of the tools at our disposal.” Ted Cruz called for “overwhelming air power” and condemned the Obama administration for having insufficient “tolerance for civilian casualties.” Ben Carson called for “boots on the ground,” while Donald Trump swore he’d “bomb the s— out of” ISIS-controlled oil fields and hand them over to ExxonMobil.

Virtually all GOP contenders, along with a gaggle of Republican governors, agreed that they’d close the door to Syrian refugees, too — as though they can evade the consequences of war by making life more miserable for the innocent people fleeing it.

None of this bravado makes me feel safer here in Washington, where ISIS threatened more Paris-style bloodshed in a recent video. When I imagine those cold-blooded killers running roughshod through the bars, restaurants, and concert halls my neighbors and I frequent, my stomach drops.

But that’s the lesson, isn’t it: When your government answers every problem in the world with military force, war begets war. And eventually there’s nowhere left to hide from it.

Peter Certo is the editor of Foreign Policy In Focus and the deputy editor of OtherWords, a non-profit editorial service run by the Institute for Policy Studies. IPS-dc.org
Distributed by OtherWords.org