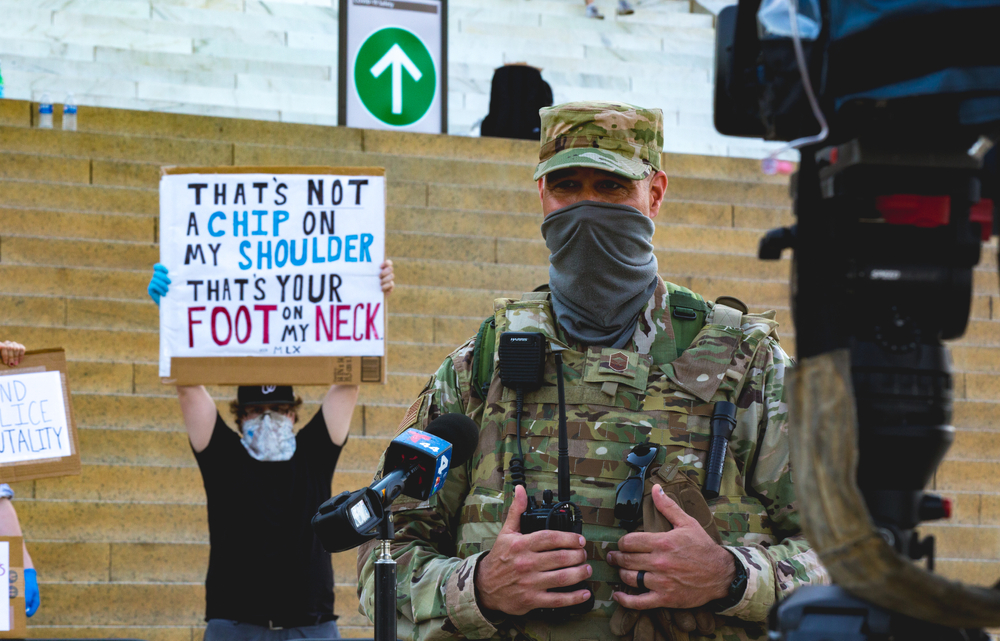 Almost as bad as Trump’s Bible photo-op was the chairman of the joint chiefs of staff joining him in combat fatigues.
By Jim Hightower | June 10, 2020

The mass these protests against systemic racism are driving Donald Trump plumb crazy! Of course, that’s a pretty short drive for him.

He would be hilarious if his buffoonery were not so dangerous and destructive. For example, he had peaceful protesters gassed, clubbed, and shoved out of the public square across from the White House so he could walk out and pose stone-faced with a Bible, as some sort of political stunt.

Especially dangerous, though, is the craven willingness of our top military officials to play along with his infantile attempts to appear manly.

When Trump strutted out to do his little Bible photo-op, guess who was loping along right behind him, like eager-to-please puppy dogs? Secretary of Defense Mark Esper and Gen. Mark Milley, chairman of America’s joint military forces.

Yes, our nation’s top two war chieftains were adding their symbolic blessing to Trump’s pathetic desire to look tough, suppress our constitutional right to dissent, and militarize his claim of autocratic powers. Milley even wore combat fatigues to the media show, apparently to model the authoritarian look We the People can expect in Trump’s brave new world.

Esper has been even more servile, playing up to Trump’s grandiosity by describing our country as a “battlespace” that “we need to dominate.” Of course, that would make you and me the dominated, which is as un-American as they could get short of trying to crown Trump as America’s king — and don’t put that past them.

To their credit, dozens of U.S. military leaders immediately assailed Esper and Milley for even implying that the armed forces could be anyone’s political pawn to police our own people, and both have since retreated.

But their willingness to toy with it shows how vulnerable our democracy is to autocrats… and how vigilant We the People must be.