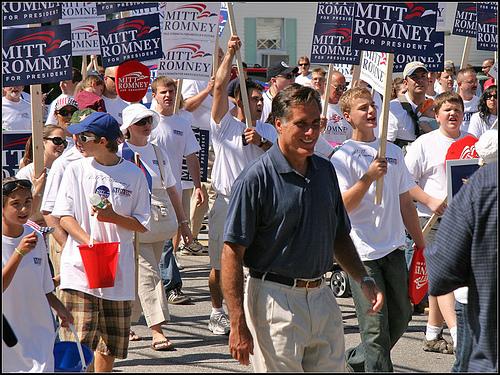 If the nation were to deny the children of immigrants birthright citizenship, as some GOP legislators believe we should, could Mitt be deported?
By Raul A. Reyes | May 16, 2011

As a Latino, family heritage is important to me. I believe we can all learn from the journeys of our ancestors. For some, these may have involved crossing the border without papers, seeking freedom from persecution, or fleeing the violence of revolution. These struggles and sacrifices have made our country great.

By the way, I’m not talking about my family. I’m referring to the uniquely American story of Republican presidential candidate Mitt Romney. I only wish the former Massachusetts governor’s views on immigration were informed by the reality of his background, rather than the generic Republican Party rhetoric he’s espousing more and more often.

Romney says undocumented immigrants should all go home, because they’re breaking the law. But his family history encompasses the flouting of the laws of two countries. His great-grandfather Miles Park Romney fled Utah for Mexico in 1884 to avoid persecution for the Mormon practice of plural marriage. Miles promised the Mexican government that his large family — he had five wives — would live peacefully and in accordance with all local laws. Still, he continued to practice polygamy, which was illegal in Mexico, even after it was banned by the Mormon Church in 1892.

Mitt Romney has spoken out against “sanctuary cities,” municipalities that protect the rights of the undocumented. He says they wrongfully harbor unauthorized immigrants. How ironic. His own family obtained sanctuary in Mexico when the U.S. government was imprisoning Mormons, stripping them of their rights, and even killing them because of their beliefs.

Romney also thinks the border should be secured, because we can’t have people coming across without papers. Yet in 1912, when the chaos of the Mexican Revolution threatened the Mormon settlements, his family returned to El Norte with no apparent need for papers or legal authorization from Washington. Mitt might never have had the chance to become a successful American businessman, the governor of a key state, or the savior of the 2002 Winter Olympics in Salt Lake City were it not for our porous border with Mexico.

Under normal circumstances, the children of Americans who are born abroad are still considered citizens. But the Romneys’ Mexican roots run deep. Three generations of the family lived there. Four of Mitt’s great-grandparents died there. His father was born there. Mitt’s father George, who served as the governor of Michigan, himself could have been a poster child for the DREAM Act. He was the son of a foreign-born immigrant who entered the United States without documentation with kids in tow.

So, if the nation were to deny the children of immigrants birthright citizenship, as some GOP legislators believe we should, could Mitt be deported?

That’s why I find the story of the Romneys quite fascinating. Mitt’s ancestors sought religious freedom and the chance of a better life. They took their future into their own hands. They did what they needed to do to survive — just like millions of undocumented people continue to do today, including many from Mexico.

And while I don’t condone polygamy, I do admire the Mormon pioneers who risked everything for what they believed in. If only Mitt had such strong principles. As the governor of Massachusetts, he was in favor of accessible healthcare for all. Now he soundly opposes the federal government’s new health program. He was once pro-choice but now favors outlawing abortion. He takes a firm stance against employing undocumented immigrants, yet has been caught twice with workers without papers who were mowing his lawn and doing other work on his property. This kind of flip-flopping and fudging on the issues hardly shows a commitment to leadership.

During his last run for the Republican nomination, Mitt Romney told the Christian Science Monitor that he was proud of his Mormon faith. “These are my beliefs,” he said. “They form who I am.” Sadly, I have to wonder about that, for the Book of Mormon itself instructs compassion towards all immigrants. In 2 Nephi 1:6, the prophet Lehi speaks of the New World (America) and his message could not be clearer: “There shall none come into this land save they shall be brought by the hand of the Lord.”

Raul A. Reyes is an attorney and columnist in New York City.