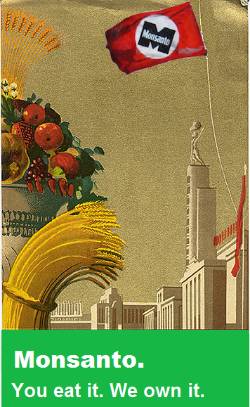 Instead of paying for honors to be bestowed upon its own scientists, the genetic manipulator should listen to Pope Francis.
By Jim Hightower | October 29, 2013

It was my privilege to go to Des Moines recently for a World Food Prize extravaganza recognizing Monsanto’s work against global hunger. But wait, Monsanto is not a hunger-fighter. It’s a predatory proliferator of proprietary and genetically engineered seeds.

That’s why I wasn’t actually attending the ceremony to bestow a false halo on the corporate giant. Rather, I was one of more than 500 scruffy “outsiders” in the city’s First United Methodist Church to protest the Monsanto absurdity.

There, real-life Iowa farmers spoke plainly about the countless abuses they have endured at the hands of the genetic manipulator. 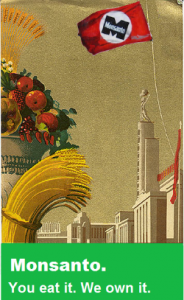 One pointed out that if the corporation genuinely gave even one damn about hunger, it could’ve used its immense lobbying clout in Washington this year to stop Congress from stripping the entire food stamp program from the Farm Bill. Instead, Monsanto didn’t lift a finger to help fend off hunger in our own country.

“It doesn’t care at all about feeding the world,” the Iowa farmer said with disgust. “It cares about profits, period.”

Indeed, Monsanto is a pitch-perfect example of what Pope Francis was referencing in May, when he declared: “Widespread corruption and selfish fiscal evasion have taken on worldwide dimensions. The will to power and of possession has become limitless. Concealed behind this attitude is a rejection of ethics.”

How ironic, then, that Monsanto bought this year’s World Food Prize for itself, just to masquerade as a world hunger fighter, hoping to persuade the Vatican to bless its demonic effort to force the world’s poor farmers to buy and become dependent on its patented seeds.

The World Food Prize Foundation says it recognizes contributions for “agriculture.” But Monsanto has zero to do with agri-culture. It’s the agri-business face of the unethical, selfish, corruption that the Pope warned about.