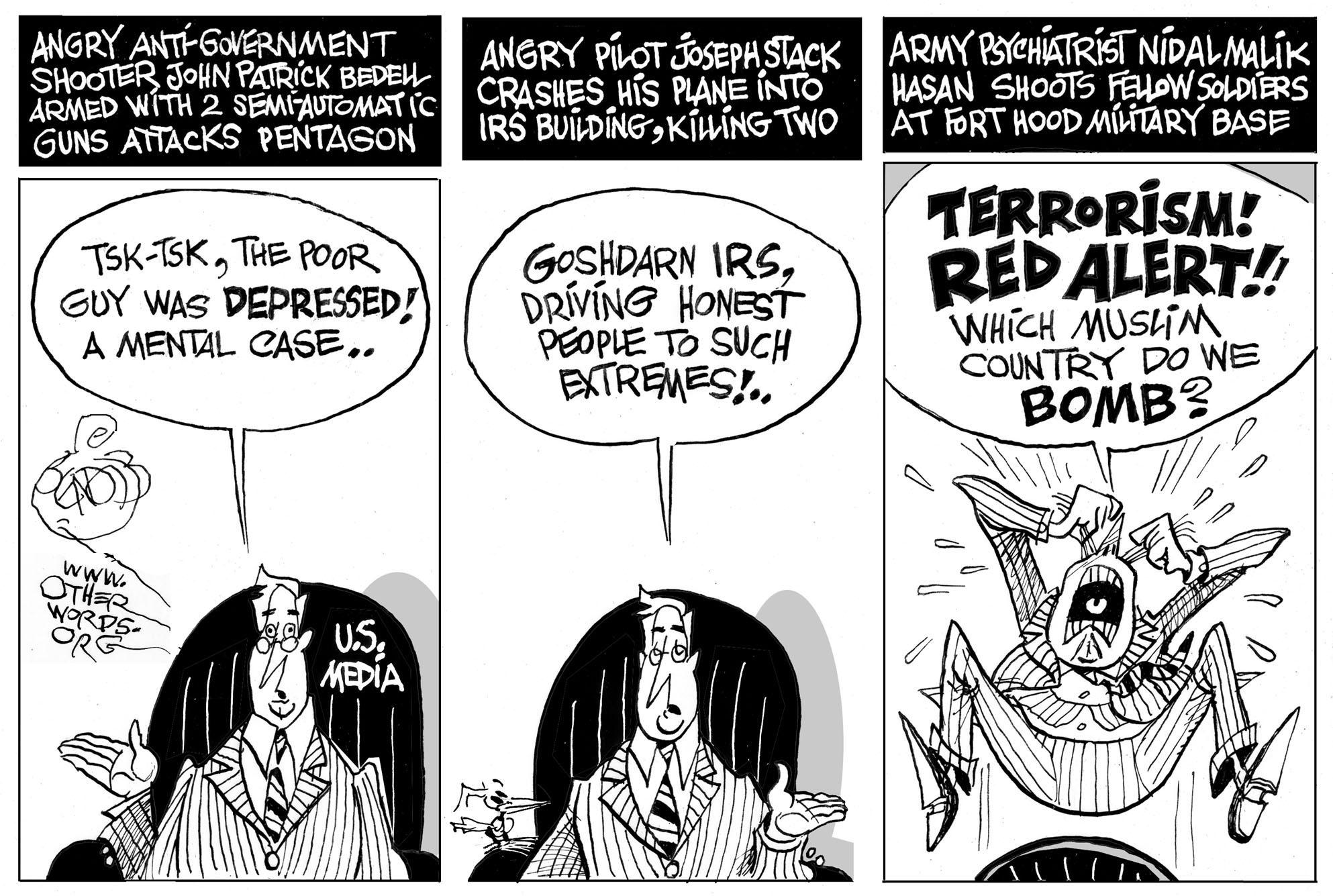 Muslims Don’t Have a Monopoly on Terrorism

Too often, politicians and pundits refer to non-Muslim terrorists as just being "deranged."
By William A. Collins | August 22, 2011

Too many Americans think the term “terrorism” only applies to Muslims. Christians, Jews, atheists, agnostics, Unitarians, or Quakers who commit unspeakable acts of horror often aren’t deemed to be real terrorists.

Consider what happened after right-wing Norwegian gunman Anders Breivik killed 77 people in July. The first response from the U.S. corporate press to this savage bloodshed, including Washington Post blogger and columnist Jennifer Rubin, was that he must be a Muslim, maybe one affiliated with the al-Qaeda terrorist network. When that assumption proved false, he quickly became just another deranged young man. 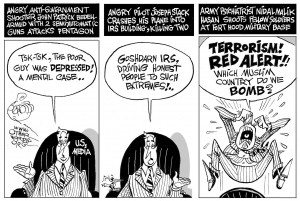 Why do so many of us only worry about Muslims? For starters, there’s a lot of oil, gas, and other high-value resources in the Middle East, Central Asia, and North Africa, right where many Muslims reside.

In the old days, Western powers simply went in and took whatever they wanted. There was no United Nations or world press to demand fair play. The great battles of the day were among those powers themselves, rather than with the natives who got trampled, colonized, and enslaved. For many years, the big struggles were between colonial powers like Britain, Spain, and France. For much of the 20th century, the Soviet Union duked it out with the United States.

Times have changed. False conscience has intruded. Beginning around World War II, countries were supposed to have a good reason before invading or occupying other nations. The United States, currently a lone superpower, has become saddled with the bothersome task of finding excuses for attacking these oil-bearing lands, at least those whose leaders we haven’t already bought off.

Paramount among the excuses for invasion is “terrorism.” We used it to justify our wars with Iraq and Afghanistan, with Iran potentially coming down the pike.

The more Washington can equate terror with the residents of those countries, the more public acceptance it creates for assaulting them.

This excuse works best if the term “terror” remains pure and is only attached to Muslims. Maybe that’s why it’s not universally applied to that Norwegian mass murderer or to Jared Lee Loughner, the man who tried to assassinate Rep. Gabrielle Giffords in Tucson and managed to kill six bystanders instead.

Ever notice how many politicians and pundits refer to those villains as “deranged,” but not as “terrorists”?

The “War on Terror” also gives our government cover as it cracks down on dissent within our borders. Laws like the Patriot Act have purposely multiplied opportunities for harassing peaceful anti-war and pro-environment groups without recourse. The government is channeling George Orwell’s 1984 when it arrests people for giving “material aid” to terrorists when they are just trying to feed starving Palestinian children or are organizing nonviolence training.

Be careful, therefore, when you hear the term “terrorism” bandied about.

A once-popular placard at anti-war marches satirically summed up the problem. It asked “What’s our oil doing under their sand?”