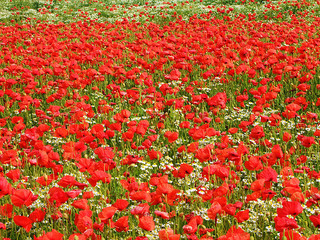 After 11 years of U.S. military operations, Afghanistan produces 90 percent of the world's poppies and 75 percent of the planet's heroin.
By Jim Hightower | May 1, 2013

After 11 years of war, $664 billion spent, 2,210 Americans dead, more than 35,000 of our troops maimed and shattered, and our good reputation spent — what have we built in Afghanistan?

According to a top international law enforcement official, you and I are building “the world’s first true narco-state.” Congratulations! “The opium trade,” he added, “is a much bigger part of the [Afghan] economy already than narcotics ever were in Bolivia or Colombia.”

You might recall that under both George W. Bush’s and Barack Obama’s war strategies, eliminating Afghanistan’s poppy production was one of America’s chief goals. That crop generates billions of dollars in annual income for the Taliban insurgency we’ve been fighting — and it fuels drug addiction here and around the world

To combat the drug trade, Washington followed a three-part strategy.

The numbers tell the tale: For the third year in a row, Afghanistan’s poppy cultivation has increased. The country’s acreage devoted to poppies this year is expected to set a record. Only one province has reduced its poppy plantings this spring while they rose in 12 other regions. Three previously poppy-free provinces will likely lose that status this year.

Wait, here’s one more tell-tale stat: An Afghan farmer can get 43 cents a kilogram for wheat, or $203 a kilogram for poppies. Which would you choose?

Our war in Afghanistan makes no sense whatsoever.

Why are we there?