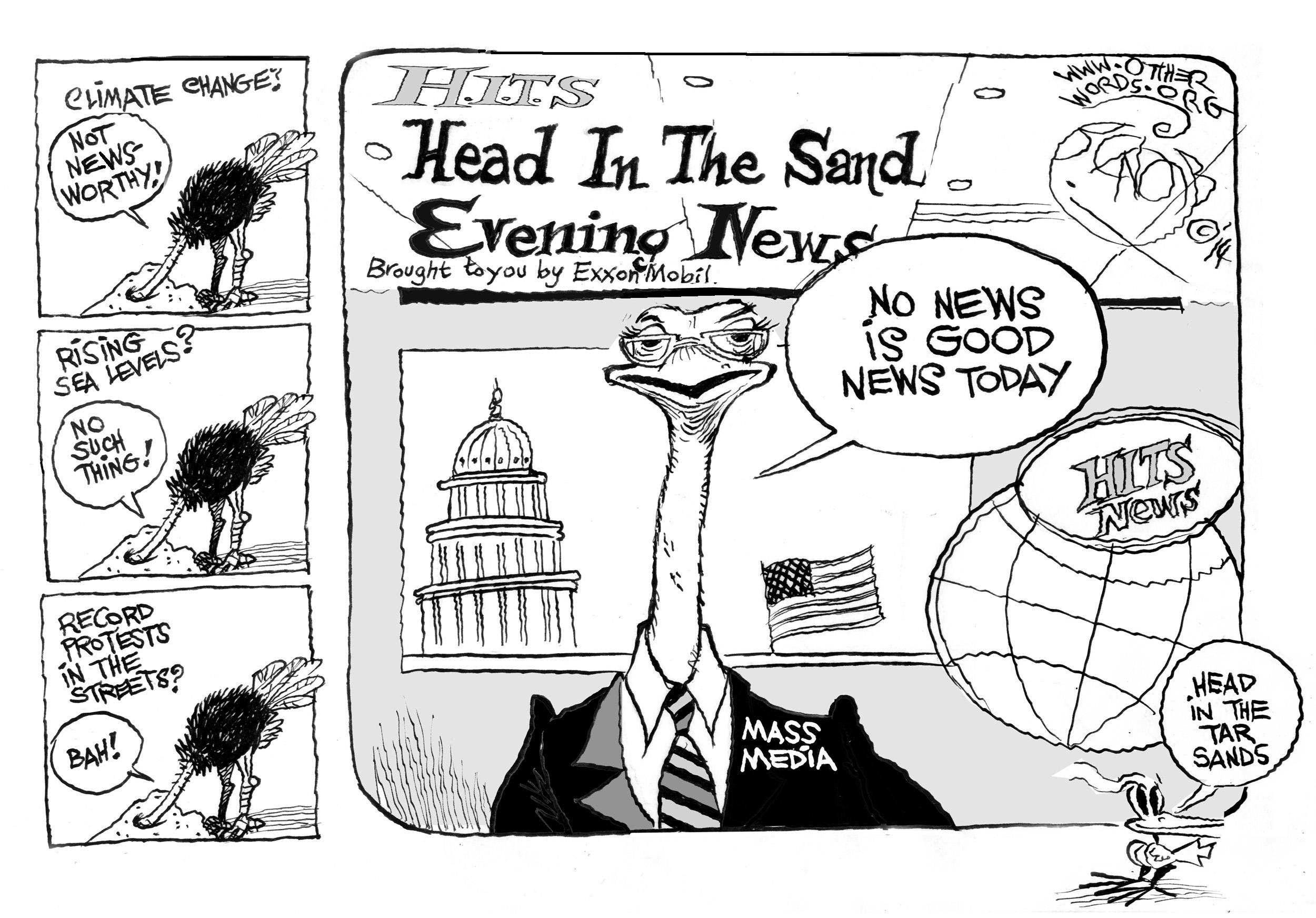 Head in the Tar Sands, an OtherWords cartoon by Khalil Bendib

When journalists cover fracking, they often fail to mention its contribution to global warming.
By Peter Hart | October 8, 2014

What planet does Big Media think it’s living on?

Over 300,000 people filled the streets of New York City in September as part of the worldwide People’s Climate March, a stirring call for action on global warming.

But if you watched TV news that day, you may not have known it happened at all. 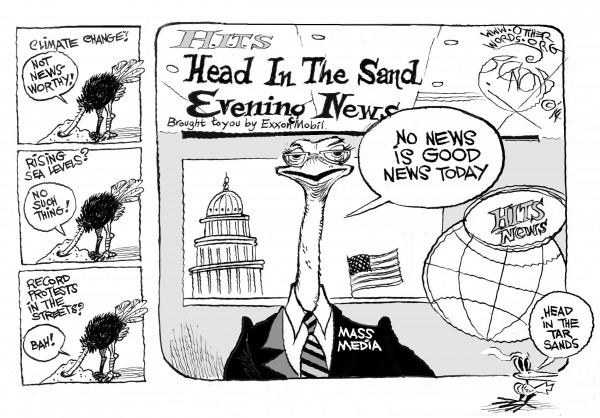 Head in the Tar Sands, an OtherWords cartoon by Khalil Bendib

The Sunday chat shows totally skipped this historic climate march. Instead, one program on the supposedly liberal MSNBC produced a sad segment about how voters are loyal to either Starbucks or Chick-fil-A. Who cares about a dynamic and broad-based social movement when you can reduce the country’s population to two corporate chains?

Sensible people know there’s no more arguing about climate change: The planet is warming due to human activity. The only important question now is whether we plan to do anything about it. It will require, among other things, a massive shift away from burning oil, gas, and coal, as Naomi Klein argues in her brilliant new book, This Changes Everything.

But it’s hard to build that kind of political momentum when the most important platform for discussing politics — the mass media — doesn’t think the future of the planet is a big story.

It’s a good bet that many reporters who cover politics or the energy industry know that we have to stop burning fossil fuels. Yet they often don’t let that fact intrude upon the stories they’re reporting.

For example, the front page of The New York Times — still the country’s most important newspaper — told readers last month, “Boom in Energy Spurs Industry in the Rust Belt.” This was a “good news” story about a Youngstown, Ohio steel plant that’s hiring workers again.

What’s the cause of the turnaround? Well, the plant is taking orders for fracking equipment. Fracking, or hydraulic fracturing, is a highly controversial oil and gas drilling process that pollutes the air, poisons groundwater, and can leak methane, a gas that’s far more heat-trapping than carbon dioxide.

But the Times report never mentioned the impact drilling for more fossil fuels will have on climate change. And they’re not the only ones: When PBS recently gave viewers a long look at the controversies over fracking in Colorado, it failed to mention the climate implications.

This refusal to look at the big picture is a new form of climate change denial. It’s logically impossible for journalists to say they believe that we must take action to save the planet — as The New York Times editorial board has claimed again and again — and then trumpet the latest fossil fuel-burning project in Ohio because it might create a few dozen jobs.

“One of the economy’s good-news stories is the oil boom,” Robert J. Samuelson wrote recently in a Washington Post column endorsing a massive expansion of the U.S. oil industry. He never mentioned climate change, even though he writes for a newspaper whose editorial board has dedicated a new series to taking the climate crisis seriously.