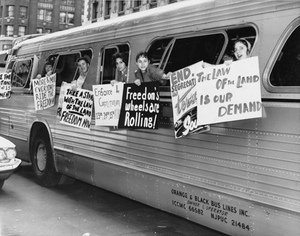 As Mississippi Moves on, a New Struggle Arises

Half a century after the Freedom Summer, black Americans face new challenges.
By Ron Carver | August 13, 2014

Fifty years ago, shortly after the Ku Klux Klan abducted and murdered civil rights workers Michael Schwerner, James Chaney, and Andrew Goodman, I was sitting in one of Starkville, Mississippi’s few black-owned cafes when Police Chief Thomas Josey stormed in and unleashed a torrent of abuse.

He claimed President Lyndon B. Johnson was a communist and that I was a “(N word)-loving outside agitator” looking to stir up “his” local “Negroes,” who were, in his mind, perfectly happy living in the segregated South.

Chief Josey couldn’t stand that I had enlisted in the fight to end segregation and secure a voice and a vote for Southern black Americans. He despised our movement’s goal to end Mississippi’s subjective “literacy tests” that allowed county registrars to enroll white voters who couldn’t read while disqualifying black college professors.

Chief Josey’s rant might have made me laugh if the consequences weren’t so dire.

I had just graduated high school in 1964 and started working with the Student Nonviolent Coordinating Committee (SNCC). My trial by fire came almost immediately, when I spent the night of June 21 calling hospitals, jails, and local and state police, trying to find the three missing civil rights workers. At midnight I had to call their parents to report that we had failed and feared the worse.

It’s well known that black Americans were regularly brutalized for speaking up, as were those of us seen as sympathizers. During my time in Mississippi I was jailed and beaten for “improper parking” and “misguided walking.”

Fortunately, Starkville has evolved since then. When I returned there recently to commemorate the anniversary of the Mississippi Freedom Summer, the whites-only movies, parks, and restrooms were gone, as were all of the segregated eateries.

African Americans are now free to vote in Starkville, and the city’s schools are integrated with black and white students, teachers, and administrators. For 20 years, Starkville has boasted a black woman chancery court clerk. And old Chief Josey is probably turning over in his grave because Frank Nichols, Starkville’s new police chief, is a black American.

Back in the day, the Klan did the dirty work, but the business elite set the tone through a network of White Citizen Councils. Remembering that, I was disheartened to learn that Mississippi opinion leaders are railing even now against the folks fighting for union rights at the Nissan factory in Canton, Mississippi that’s about 100 miles from Starkville.

Most of the factory’s workers are African Americans. But both black and white Canton workers are upset that Nissan routinely hires employees there as “temps” and pays even the most senior employees a couple of dollars less per hour than new hires in the company’s Tennessee facility. Nissan negotiates over these and many other issues with unionized workers all around the world — except at its plants in our Southern states.

You can hear an echo of the old “outside agitator” refrain in this new struggle. Consider how syndicated columnist and Mississippi State University public affairs director Sid Salter argues against the Nissan employees seeking a voice at work. He dismisses union organizers, local civil rights leaders, and pro-union ministers as “hired or rented guns.”

Salter’s epithet reminds me of how his university’s leaders were complicit 50 years ago in preserving the South’s “way of life” through their own segregated facilities, faculty, and student body — and their silence during the Jim Crow years. The few faculty opponents of segregation were so fearful of reprisals that we integrationists only visited them in the dead of night behind closely drawn curtains.

Because they bring a measure of democracy to the workplace, union rights are civil rights. Mississippi business leaders, like the White Citizen Councils of the past, may beg to differ, but they have been on the wrong side of history before.

Ron Carver is an Institute for Policy Studies associate fellow. IPS-dc.orgDistributed via OtherWords.org