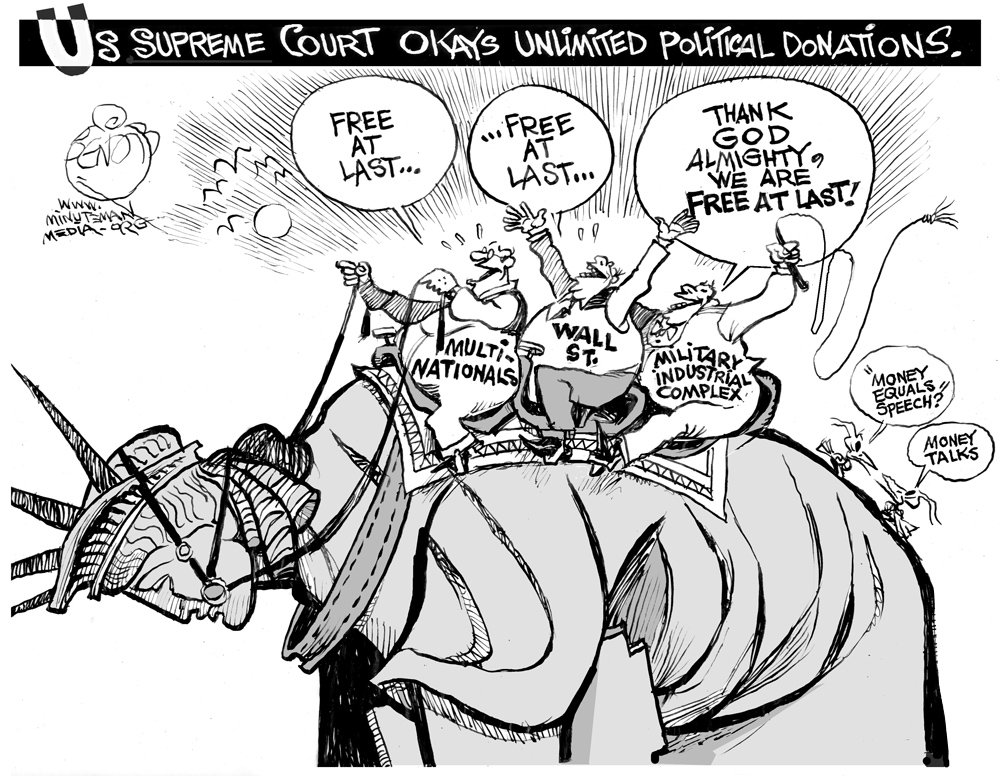 Next, We’ll Sell Senate Seats to Exxon Mobil and AT&T

Our democracy has been in decline for some time but this decision closes the books on it.
By Donald Kaul | February 1, 2010

In days of yore they called them the Four Horsemen of the Apocalypse: War, Famine, Pestilence, and Death—the scourges of humankind.

These gentlemen, all of whom solemnly swore that they would honor precedent in their judgments, kicked precedent into the ditch last month when they opened the floodgates for corporations seeking to bribe politicians.

The decision, Citizens United vs. Federal Election Commission, ended limits on the money corporations and unions can spend on influencing elections, thus writing a finish to the experiment in democracy we’ve been conducting for 220 years. 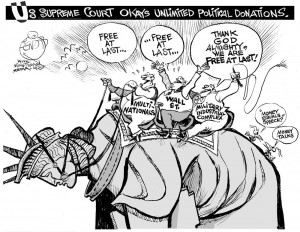 That the majority used the sword of the First Amendment—the constitutional amendment most cherished by liberals—to accomplish this maneuver merely adds a touch of dark humor to an era already replete with irony. (It was the horsemen’s opinion that the amendment afforded corporations the same right of free speech as it did individuals, and that money is the same as speech.)

The Founding Fathers believed that virtually unlimited freedom of speech was a bulwark against the triumph of erroneous thinking. Let all voices compete in the marketplace of ideas and the good will drive out the bad. Thus the First Amendment.

That was perhaps workable, if a trifle counterintuitive, so long as the voices were using comparable megaphones to make their views known. The technology of radio, television, and the Internet makes that assumption absurd. If your voice is loud enough—existing everywhere at every moment—you can sell a majority on virtually anything, even reality television.

Democracy has been in decline here for some time—just look at our pathetic voter turnouts—but this decision closes the books on it. We have traded our democratic republic for a corporate oligarchy on the model of a banana republic.

And the corporations to whom we’ve given the keys to the store aren’t even American companies. They’re multi-nationals operating in their own self-interest without regard for the national good.

We’ll still have elections and rallies and arguments and tea parties. So what? It’s all a show, the political equivalent of professional wrestling.

The tea-baggers are congratulating themselves on Scott Brown winning a Senate seat by riding around Massachusetts in a pickup truck. “He’s ‘a man of the people” who will hear their voices, they say.

Sure he will, but their voices won’t ring as loudly in his ears as those of the insurance and oil companies, not to mention defense contractors. Not nearly as loudly.

I’m going to revive a proposal I made a while ago that didn’t, in my opinion, get the attention it deserved.

I think we should do away with the charade of elections, at least for the Senate. Let’s replace them with an auction. I mean a real auction, with an auctioneer and gavel.

Let corporations bid on each Senate seat, with the money going to the treasury of the state involved. Having bought a seat, the winning corporation could then fill it with any stooge it chose—more or less as they do now, but without the hypocrisy.

I would also mandate a Senate uniform—based on what NASCAR drivers wear—that carries the corporate logos of the Senator’s owner.

House elections should be maintained to give people the illusion that they matter, even though they don’t. Remember when you were a little kid and your father let you wash the wheels of the car to make you feel grownup? Like that.

Goodbye, democracy. You had your flaws but you were a good old system—the best. We shall miss you.