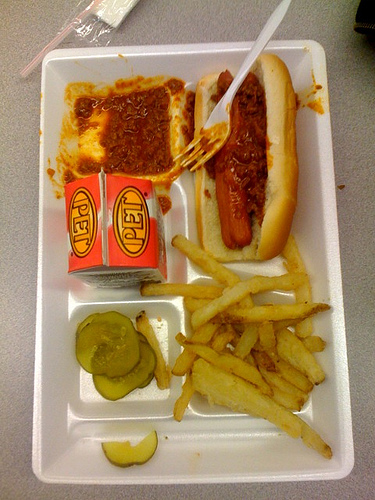 No Appetite for Fixing School Lunch

Making healthy food taste good will require a spending increase that's not on the table.
By Jill Richardson | August 13, 2014

You can lead a kid to vegetables, but you can’t make her eat. Especially if the food doesn’t taste good.

That’s what the government found out in the wake of the Healthy Hunger-Free Kids Act of 2010. 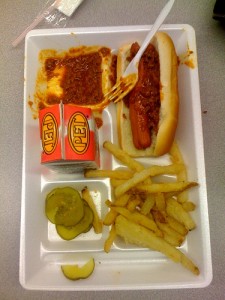 I was active in advocating for school lunch reform at the time. The bill became law shortly after I published a book on U.S. food policy. It seemed like such a perfect solution: Fix school lunch and you improve the diets of millions of kids instantly. You also help the next generation develop healthy habits for life.

Kids who eat breakfast and lunch at school eat nearly half their week’s meals in the cafeteria. Kids who just eat school lunch consume nearly one quarter of their meals at school. Swapping out French fries for sautéed kale and sugary foods for fresh fruit would go a long way to improve our nation’s diets and health.

If only the kids would eat them, that is.

Here’s the thing. Back when the law was debated, school lunch and nutrition experts agreed on a number of things that schools needed, like tougher nutrition standards — but nothing will improve if Congress doesn’t give schools more money. As best as I could tell, it would take about an extra 50 cents to a dollar per meal to really get school lunch where it ought to be. Instead, Congress gave schools a mere six cents more.

Junk food, on the other hand, requires freezers, microwaves, and very few skills to heat and serve.

Another sticky point: Making healthy food taste good for cheap is not easy. As Michael Moss pointed out in his book Salt Sugar Fat, Campbell’s soup could drastically reduce the sodium in its soups if it replaced it with fresh herbs like rosemary. But rosemary is expensive, salt is cheap, and if you simply cut the salt without adding herbs to the soup, it tastes terrible.

Switching up kids’ food also requires outreach. Kids can resist trying new foods, but — with some effort by caring grown-ups — they can even enjoy healthy foods.

Take the time I had fifth-grade Girl Scouts over to learn about children’s lives in Kenya. The girls took a pretend trip to Kenya in which they planted seeds, harvested kale, and cooked the Kenyan corn dish, ugali, which is similar to polenta.

I expected full-scale rebellion when the girls ate their meal of beans, kale, and corn. Instead, they fought over the kale and begged for more. They didn’t just earn a badge for their vests, they discovered that beans and green veggies can taste good.

Without increasing the $11 billion federal budget for school lunches, you get in the pickle we’re in now. Schools can’t afford to meet tighter nutrition standards, and kids are throwing out the increased fruits, veggies, and whole grains schools now serve instead of eating them. This shouldn’t be a surprise.

And yet, the political debate doesn’t revolve around giving schools the increased funding they need to make healthier lunches work. Instead, Rep. Robert Aderholt (R-AL) proposed giving struggling schools a break from the tighter nutrition standards for the next school year.

Increased spending on better lunches could create new jobs for lunch staff while improving the health of America’s youth — and that would continue to pay us back for decades to come as today’s kids grow up with healthier habits.