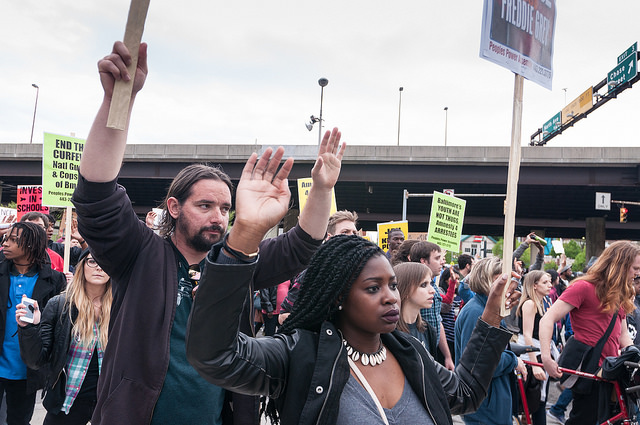 If violence isn’t the answer, somebody should tell the police.
By Nathalie Baptiste | May 6, 2015

As cities erupt after decades of oppression and violence at the hands of police, calls for nonviolence can be deafening. “Violence isn’t the answer,” the moralists chide when protesters throw rocks and clash with police.

On April 12, Baltimore resident Freddie Gray made eye contact with a police officer and ran. Sometime after the police detained him, his spine was severed. He died a short time later.

Maryland’s state attorney has since announced a range of charges — from false imprisonment to second-degree murder — against the six police officers involved in Gray’s death, who’d had the gall to claim that the handcuffed Gray inflicted his injury on himself.

Upon the news, some Baltimore residents stopped protesting and started celebrating. But some damage can’t be undone: A 25-year-old man is dead. 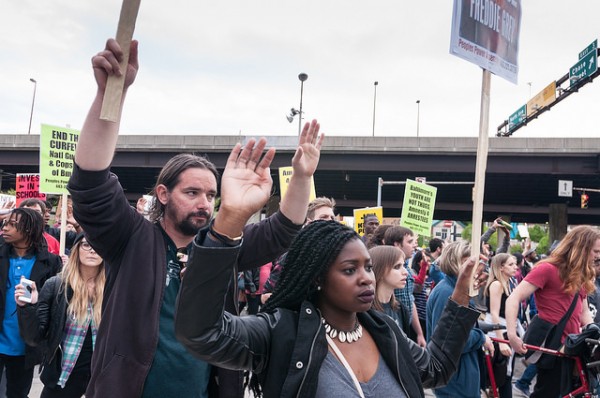 Seven-year-old Aiyana Stanley-Jones was sleeping when Detroit police broke into her house and shot her in the head. Akai Gurley was just taking the stairs in his New York apartment building when a startled cop shot him dead. The unarmed and unresisting Eric Garner was gruesomely choked to death by police officers on Staten Island.

Why are the killers of a sleeping child or an innocent man in his own apartment building not condemned as murderers when rock-throwing teenagers are castigated as violent thugs?

Garner’s gruesome choking death, which a bystander caught on video, didn’t elicit calls by mainstream America for nonviolence. But when a few angry people in Baltimore burned a CVS, critics unleashed a landslide of Martin Luther King Jr. quotes, sanitized for white consumption.

Each death leaves the black community and its allies a little bit sadder, but united nonetheless. Marches, rallies, and protests have reverberated in every major city — most of them peaceful, but a few resulting in the destruction of property and violence.

Nobody wants to see people hurt, businesses burned, or innocent lives disrupted by violence in their communities. But you can’t understand Baltimore’s unrest in isolation from the violence its residents face at the hands of their own government.

They threw rocks and burned cars because of their unbelievable anguish at seeing their brothers, sisters, and neighbors slain by those who are supposed to serve and protect.

Yes, violence isn’t the answer. Maybe somebody should tell the police.

Nathalie Baptiste is a writing fellow at the American Prospect, where an earlier version of this op-ed appeared. Prospect.org.
Distributed by OtherWords.org.