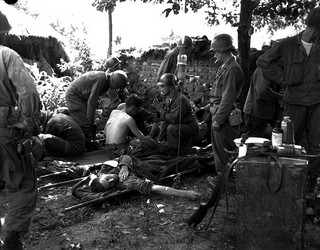 The saber-rattling is mutual.
By Emily Schwartz Greco, William A. Collins | June 12, 2013

As our dust-up with North Korea stumbles inexorably onward, the U.S. media is tearing its hair out over how any sovereign nation could possibly act so irrationally. Well, how about looking in the mirror?

North Korea’s policies and supreme leader may seem kooky, but our nation isn’t necessarily all there either when it comes to our own military policies.

Besides, put yourself in North Korea’s shoes. If you were nearly surrounded militarily by the world’s greatest power, a nation that despises your government, might you not be a bit paranoid yourself? Would you not heed the U.S. invasions of Vietnam, Iraq, Afghanistan, and Libya and wonder when you’ll be next?

Then there’s the not-so-small matter of genocide. According to our own iconic Gen. Curtis Lemay, U.S. forces may have killed 20 percent of North Korea’s population during the needless conflict that began in 1950 and subsided into a protracted stalemate three years later. North Koreans are about as likely to forget that history as Jews are to forget the Holocaust.

Six decades after the unofficial close of hostilities, we continue to station 28,000 troops there on 15 military bases. Another 50,000 remain in nearby Japan. And just to keep the pot boiling, the Pentagon is counting on getting access to a base the South Koreans are building on Jeju Island.

Were you a Pyongyang resident, you might also heed the annual U.S.-South Korean war “games,” which simulate an attack on you-know-who, including landing an invasion force on a Northern beach. This year, the games were upgraded to include dry runs by two nuclear-capable B-2 stealth bombers, flown in all the way from Missouri at enormous cost.

So why should we be surprised that North Korea wants its own nuclear weapon arsenal if it thinks that will somehow help with self-defense?

A bigger question is why the United States remains so obsessed with that country. Is it leftover Cold War fever?

Maybe it’s the Military-Industrial Complex. It’s way easier to maintain a bloated war machine like ours with at least a few certified enemies. The Pentagon tries to paint China as a big threat, but that’s a hard case to make when our economies are so intertwined. Russia? Been there and done that.

Who’s left when the big guys won’t play ball? Well, often it looks like North Korea is all we’ve got.

The media help keep this illusion up by playing fear-mongering to the hilt. Saber-rattling always makes good copy.

Meanwhile, life in both North and South Korea proceeds unfazed. It makes you wonder about how big a threat Pyongyang really is, doesn’t it?