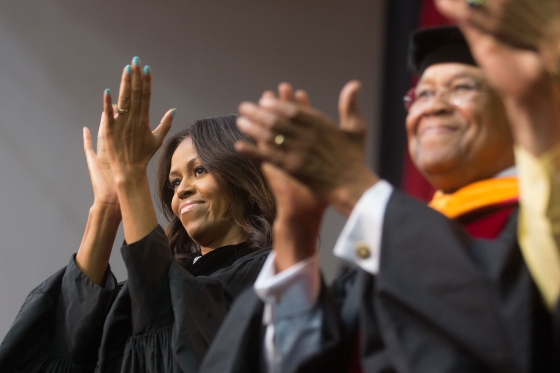 Not About Us Without Us

If you want to understand people who are different from you, listen to them directly.
By Jill Richardson | June 10, 2015

A few of my African friends have adopted a slogan: “not about us without us.” They use it to protest international decisions about their continent that are developed without any input from African people.

It’s a wonderful phrase. I think it applies to a few recent events in our country as well.

Take Michelle Obama’s commencement speech at Tuskegee University. The first lady spoke honestly and directly about the racist attacks black Americans — including even her and her husband — regularly endure, while raising up heroic African Americans like Charles DeBow, a World War II fighter pilot.

Now, I live in a happy little bubble in which I get my news mainly from NPR. And, in my view at least, NPR did a pretty good job covering the speech.

Host Tom Ashbrook, for example, invited a panel of three black women to discuss their views on Obama’s speech and the media’s reaction to it. They felt that Obama spoke relatably about her own personal experiences in a way that was appropriate to the audience at the university.

As a white listener, I appreciated getting a chance to hear what they had to say. After all, it was a speech by a black woman to a mostly black audience that dealt with the experiences of black people. But some white pundits felt comfortable jumping to their own conclusions.

Rush Limbaugh accused Obama, predictably, of “playing the race card.” Sean Hannity concluded that the first lady just didn’t “appreciate the opportunities” she had. Mark Levin, I kid you not, said the Obamas had “done more to drag the United States backwards with race relations than anyone in modern history.”

Another episode that comes to mind is Caitlyn Jenner’s recent coming out as a trans woman.

NPR, again, seemed to do a pretty good job.

One segment I tuned into featured several transgender people providing their takes on Jenner’s Vanity Fair cover. As a cisgender person — “cis” meaning simply that I identify with the gender I was assigned at birth — these were valuable viewpoints to hear.

The guests celebrated the heightened awareness and acceptance of the trans community that Jenner promoted.

But they also noted that Jenner has access to medical care and surgical procedures that many trans people lack. They discussed problems of violence against transgender people, particularly trans women, and brought up the high rate of suicide attempts in their community.

By giving trans people space to speak directly to their own experiences, the show broadened my understanding about the wider issues the community faces. This is media done right.

Sadly, that’s not how the rest of the media handled it.

Particularly in the case of Fox News and conservative talk radio, transphobic hosts wasted no time aiming a steady stream of criticism at Jenner.

“Bryan Fischer said Jenner’s transition is a sign that America is ‘morally corrupt’ and on the verge of destruction,” reported People For the American Way’s Right Wing Watch. “Alex McFarland has called it ‘demonic’ and Sandy Rios said it was ‘a human tragedy.'”

Everyone has a right to their own opinion, of course. But understanding and tolerance will continue to elude us all without broader dialogue. And good conversations require listening.

At the very least, the media can help the white people who still don’t get it to understand the experiences of black Americans. And it can help more cisgender people understand the lives of transgender folks. Inviting more members of these communities to speak on talk shows is a good start.

In other words, as my African friends would put it: “not about us without us.”