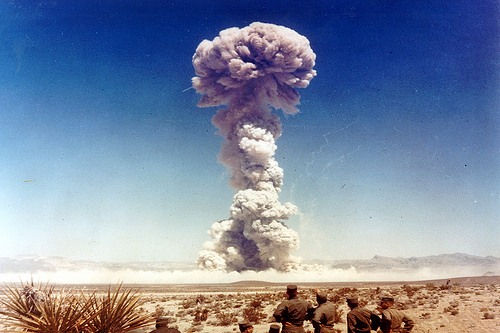 A new Pentagon document indicates that contingent plans for the use of nuclear weapons are being made, with the self-evidently impossible task of minimizing collateral damage.
By Peter Weiss | July 10, 2013

Soon after President Barack Obama began his first term, he called for a world free of nuclear weapons. His address, which quickly became known as Obama’s Prague Speech, helped him win the 2009 Nobel Peace Prize.

Then, he dropped the ball.

The Pentagon finally followed up in late June with a strange document that fails to explain how Obama intends to make progress toward full nuclear disarmament. 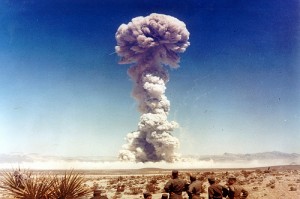 Even though the Report on Nuclear Employment Strategy of the United States doesn’t do that, it still should have been news. Instead, the mainstream media took a pass.

In the past, these documents, the last of which the Pentagon issued in 2010, were called “Nuclear Posture Reviews.” They focused largely on the role of nuclear weapons for deterrence. Now for the first time the word “employment” — another word for “use” — is in the title.

Is this a not-so-subtle way of telling our enemies, actual and potential, that we are not afraid to use these weapons of mass annihilation?

To drive home that point, the report states that, while the “2010 Nuclear Posture Review established the (Obama) administration’s goal of making deterrence of a nuclear attack the sole purpose of U.S. nuclear weapons…we cannot adopt such a policy today.” 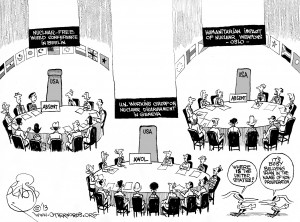 Instead, this report explains, “the new guidance re-iterates the intention to work towards that goal over time.”

What are the other purposes of U.S. nuclear weapons besides trying to stop nuclear attacks by others?

Alas, the report doesn’t really say. Instead, it vaguely states that while the threat of global nuclear war has become remote since the Cold War ended, the risk of nuclear attack has increased.

The phrase “new guidance” appears repeatedly in the report. But it leaves readers guessing about the nature of such guidance as it relates to the most important goal of U.S. nuclear-weapons strategy: “strategic stability” with Russia and China.

The report indicated that our government is sticking with its longtime concept of “extended deterrence,” a commitment to also use our nuclear arsenal for the benefit of U.S. allies and partners. But what does “partners” mean in this context? The report doesn’t say.

And it looks like the government remains sold on the idea that it must maintain a stockpile of non-deployed nuclear warheads in case deterrence with deployed ones should fail.

There are other mysteries.

The Pentagon’s report states, “The new guidance makes clear that all plans must also be consistent with the fundamental principles of the Law of Armed Conflict. Accordingly plans…will seek to minimize collateral damage to civilian populations and civilian objects.”

Thus, plans for the use of nuclear weapons are being made, but the planners have been given the self-evidently impossible task of minimizing collateral damage.

In February, Germany sponsored a conference in Berlin on creating the conditions for a nuclear-weapons-free world. Washington didn’t participate.

In March, Norway held a conference in Oslo on the Humanitarian Impact of Nuclear Weapons. Delegates from 127 countries attended. None were from the United States.

In May, the Working Group on Nuclear Disarmament created by the UN General Assembly held its first meeting in Geneva. The United States skipped it.

Obama’s recent declaration in Berlin that Washington might be willing to reduce its stockpile of more than 1,500 deployed nuclear warheads by one-third to 1,000 drew applause from some arms-control supporters. I’m holding my applause until he demonstrates the political will to work on the goal of scrapping nuclear weapons altogether.

Peter Weiss is the President Emeritus of the Lawyers Committee on Nuclear Policy.
Distributed via OtherWords. OtherWords.org