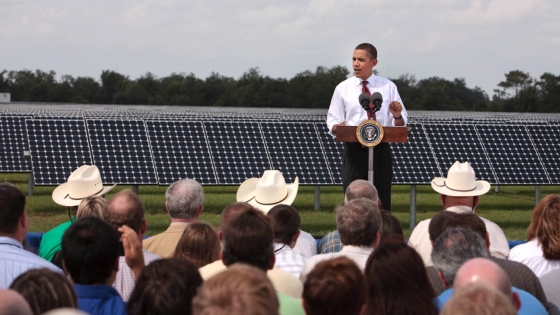 Obama Takes a Walk on the Greener Side

As Nevada short-circuits its solar boom, the White House gets more committed to renewable energy.
By Emily Schwartz Greco | January 20, 2016

Until now, President Barack Obama has embraced gas and oil fracking, encouraged the construction of new nuclear reactors, and hailed government investment in wind and solar power. In keeping with this “all-of-the-above” energy strategy, he’d call for climate action one minute and sign off on measures destined to boost carbon pollution the next.

Suddenly, it looks like Obama may have ditched his inherently contradictory approach.

“We’ve got to accelerate the transition away from dirty energy,” he asserted during his final State of the Union address. “I’m going to push to change the way we manage our oil and coal resources, so that they better reflect the costs they impose on taxpayers and our planet.”

Just three days later, the Obama administration moved in that direction by declaring a three-year moratorium on new leases to mine coal from federal land.

“We’re taking steps to give homeowners the freedom to generate and store their own energy —  something environmentalists and tea partiers have teamed up to support,” he said. There’s plenty going on at a larger scale too. Wind and solar energy are generating more than half of the new power that came online last year.

The Republican Party’s obsession with “job creators” should make it a fan of green energy. Nearly 210,000 Americans now work for the solar industry, and some 73,000 are employed in the wind business. Renewable power forged at least 79,000 new jobs between 2008 and 2012 as 50,000 coal jobs vanished.

But the fossil fuel industries and their political allies won’t surrender without a fight. As Obama put it: “There are plenty of entrenched interests who want to protect the status quo.”

To see what he meant, check out what’s up in Nevada.

Right before Christmas, the state’s electric-sector regulators short-circuited policies that rewarded homeowners for investing in their own solar panels. Nevadans may end up paying for the privilege of generating their own electricity, rather than getting compensated for it.

This about face prompted companies like SolarCity, Vivint, and Sunrun to shutter their operations in the state. SolarCity CEO Lyndon Rive is calling this move an act of “sabotage,” and two Las Vegas residents have already filed a class action lawsuit.

Along with rigging the rules, fossil fuel lobbyists are trying to extract new political favors. The coal industry, for example, wants new government handouts from West Virginia’s cash-strapped government. And there are rumblings about a federal bailout for Big Oil.

This money ought support the green transition, not delay it. That’s what Obama meant when he asserted: “Rather than subsidize the past, we should invest in the future.”

And although polls have shown that government efforts to expand solar and wind power enjoy bipartisan support, GOP presidential contenders and many Republican leaders dismiss these increasingly competitive industries.

“Why would we want to pass up the chance for American businesses to produce and sell the energy of the future?” asked Obama, raising an excellent question. “The jobs we’ll create, the money we’ll save, and the planet we’ll preserve  —  that’s the kind of future our kids and grandkids deserve.”

Indeed. Supposedly pro-business politicians who are out to kill the green energy boom make no sense. Neither does an all-of-the-above energy strategy.