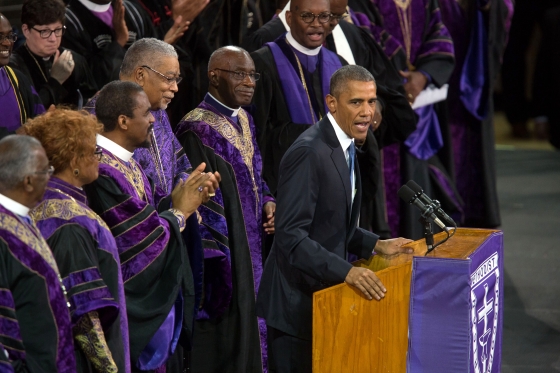 He left Clementa Pinckney’s funeral as a black man who happened to be president.
By Donald Kaul | July 1, 2015

If Martin Luther King’s I Have A Dream speech is the 20th century equivalent of Abraham Lincoln’s magnificent Second Inaugural — and I think it is — then what President Barack Obama gave us in Charleston, South Carolina is our century’s Gettysburg Address.

He gave a marvelous eulogy that was powerful and eloquent. He was moving without resorting to sentimentality.

Obama embraced the life of Reverend Clementa Pinckney, slain in his historically black church by a white racist only days before. Rather than merely eulogizing the man, Obama traced the black experience in America, all through its history of slavery, war, segregation, discrimination, mass imprisonment, and murder.

And despite the bleakness of that history, Obama found redemption in Pinckney’s life. He talked about the reverend’s gift of grace, and how grace has buoyed African Americans through their darkest times and armed them with a kind of invulnerability.

Was Obama trying to say that black people are truly invulnerable? Of course not. But through the deeds of people like Pinckney and the notion of grace they embody, black Americans have survived.

The message was all the more effective because Obama delivered it in the cadences of the black church. As he wrapped it up, he broke into the hymn “Amazing Grace” and invited the audience to join in.

I don’t know how much good it will do. Maybe some. It looks like the Confederate battle flag will be taken down from its perch at the South Carolina State House and other public buildings across the South. In terms of symbolism, that’s no small thing.

“Removing the flag from this state’s Capitol would not be an act of political correctness,” Obama said. “It would not be an insult to the valor of Confederate soldiers. It would simply be an acknowledgment that the cause for which they fought — the cause of slavery — was wrong. The imposition of Jim Crow after the Civil War, the resistance to civil rights for all people, was wrong.”

When have you heard an American president cut through the mythology with which the South has wrapped the Civil War — the “War Between the States,” they call it, or even the “War of Northern Aggression” — with so simple and direct a statement? The cause for which they fought was wrong. Period. End of argument.

The greatness of Lincoln’s Gettysburg Address wasn’t universally accepted when it was delivered. Lincoln’s partisan enemies said it was inappropriate to the occasion, and some of them even attacked it as “silly.”

I don’t watch Fox News (doctor’s orders). But I imagine its crew of political harpies and trolls gave the Charleston eulogy a similar welcome.

I feel sorry for them. I forgive them. I’m in that kind of mood. I’m as close to a state of grace as you can get without actually believing in God.

But I believe in something: a power that’s larger than oneself that arises from masses of people struggling for justice and listening to — as Lincoln said in his first inaugural address — “the better angels of their nature.”

Some people will call Obama’s speech political. Of course it was. He is, after all, the president of the United States. Every word out of his mouth is political in some way or another.

How, he asked, can we permit so many of our children to live in poverty, and for tens of thousands of our young people to be caught up in our criminal justice system? How can we make it harder for some of our fellow citizens to vote?

He indicted our relative indifference to the carnage of gun violence that takes 30 lives every day in our nation.

“Every time something like this happens, somebody says we have to have a conversation about race,” Obama said. “We don’t need more talk.”

It’s time to do something.