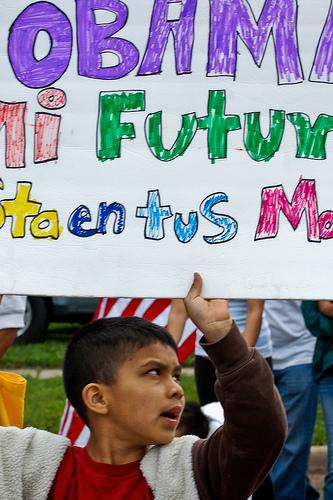 A young protester holds up a sign urging Obama to change the dreamers' future. Photo by Sasha Yimel/Flickr.

With this new immigration policy, Obama is galvanizing his reelection prospects and potentially boosting support for many Democratic congressional candidates in November.
By Matias Ramos | June 18, 2012

When Homeland Security Secretary Janet Napolitano announced she was instructing all her agencies to stop automatically deporting young undocumented immigrants and grant them work permits, I breathed a sigh of relief.

The new policy closely resembles the Development, Relief, and Education for Alien Minors (DREAM) Act. It says that those undocumented immigrants who came to the United States before they turned 16 and have lived in this country for more than five straight years while staying in school and out of trouble may legally work. It means that members of nationwide immigrant networks like United We Dream, the National Day Laborers Organizing Network, and the National Immigrant Youth Alliance could be applying for work permits as early as August. 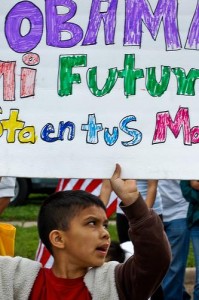 A young protester holds up a sign urging Obama to change the dreamers’ future. Photo by Sasha Yimel/Flickr.

The new policy was unveiled Friday and took effect immediately. President Barack Obama himself affirmed it in a Rose Garden speech that afternoon, explaining that “it makes no sense to expel talented young people who, for all intents and purposes, are Americans.”

This certainly applies to my brother, who will probably tap this new immigration policy. Facundo is a 23-year-old undocumented man with a computer science degree from the University of California, San Diego. He put himself through college with tremendous sacrifice and hard work. His programming skills are an asset for this country. How could the United States benefit from deporting him to Argentina, where we were born?

Clearly, this is a perfect issue for Obama to galvanize his reelection prospects and boost support for many Democratic congressional candidates in November. The DREAMers, after all, offer an ideal way to highlight the real consequences of Republican obstruction in Congress. And stopping the senseless deportation of talented young people — including valedictorians — may deliver more Latino votes for Obama.

Much of his speech focused on the inability of Congress to reach consensus on the DREAM Act. Majorities in both the House and Senate supported the measure in 2010, but a minority in the Senate that included 36 Republicans and five Democrats blocked it.

Mitt Romney’s muted response is a positive sign for DREAMers. It indicated that the new policy blindsided Republicans, even if the usual chorus of anti-immigrant politicians quickly denounced the move. Rep. Steve King (R-IA), for example, said he will sue the Obama administration. Sheriff Joe Arpaio said he was suspicious of the timing.

Romney, however, faces an uphill battle in garnering enough Latino votes in crucial battleground states. He stopped short of saying he’d reverse the policy if he were president. With support from the immigrant rights movement, hundreds of thousands of young people could benefit from it before the end of the year. By the time Romney might be sworn in and reverse the policy, it would mean taking on a highly networked community with the potential to shift public opinion. And that wouldn’t be advisable.

Despite this exciting news, the immigrant rights movement is taking a wait-and-see approach. Why are we skeptical? Last year, Immigration and Customs Enforcement (ICE) Director John Morton announced another “prosecutorial discretion” policy. That time around, there was little fanfare and the president never spoke about it publicly.

A year later, the government has dropped less than 1 percent of the relevant deportation cases. This new process will include the agency charged with processing people for naturalization and citizenship, along with ICE. Even those who aren’t facing or fighting deportation will be able to present evidence documenting how long they’ve lived in the United States and get work permits.

Envision thousands of new Americans lining up to get recognized as such. If that actually happens, it will improve Obama’s re-election chances and change thousands of lives in the process.

Matias Ramos, the Institute for Policy Studies’ Carol Jean and Edward F. Newman fellow, is a former undocumented student and a co-founder of the United We Dream Network. www.ips-dc.org
Distributed via OtherWords (OtherWords.org)