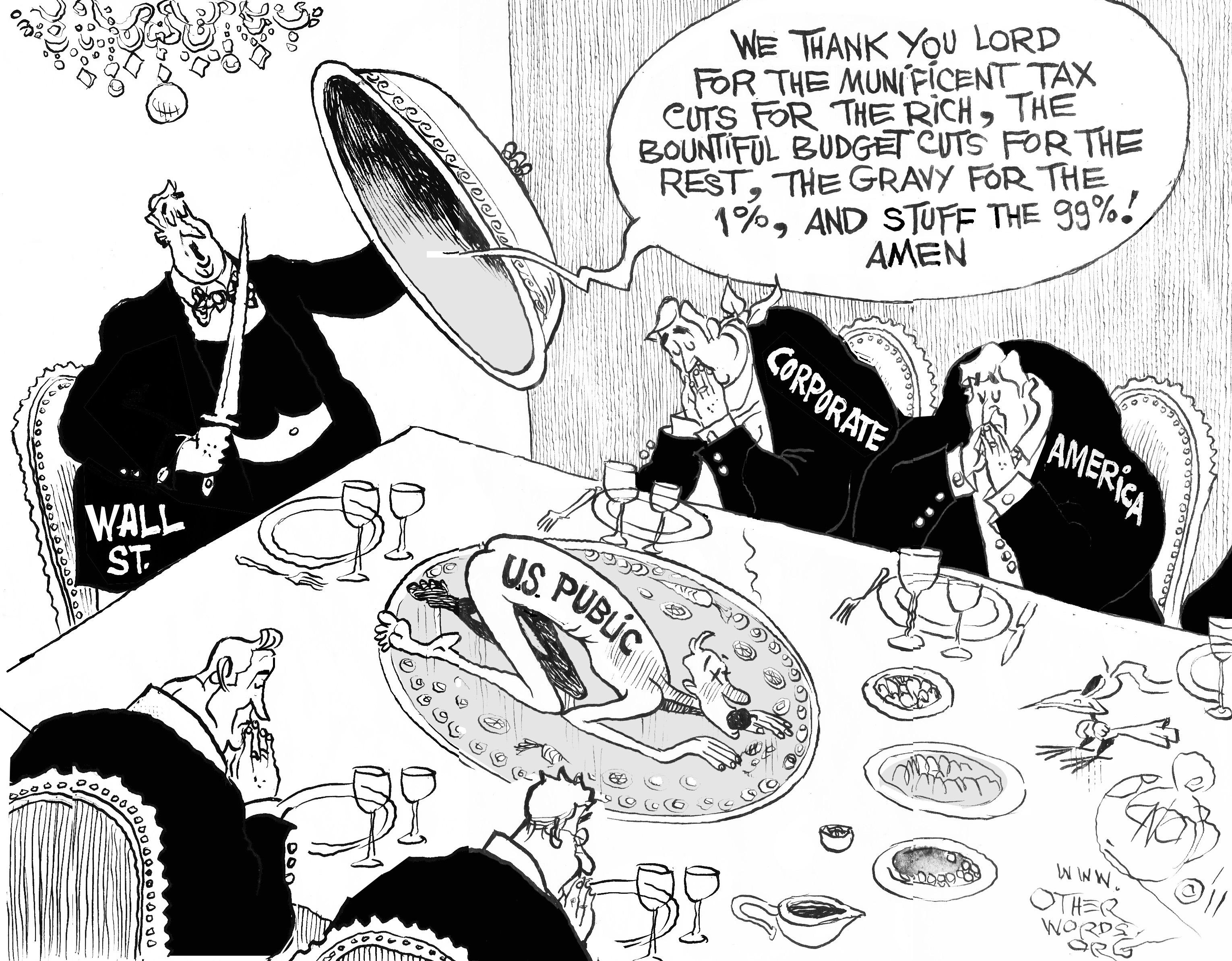 How to pay for the crisis while making our nation more equitable, green, and secure.
By Sarah Anderson | November 21, 2011

Some lawmakers are trying to give America the cartoon image of a penniless hobo, circa 1932, with holes in his pants and nothing but a cold can of beans for dinner. We’re broke, they say, with no choice but to slash spending on public services.

The truth is that we’re a rich nation. We need to make big changes, of course. But we should see this crisis as an opportunity to harness the country’s abundant resources in ways that will make us stronger. 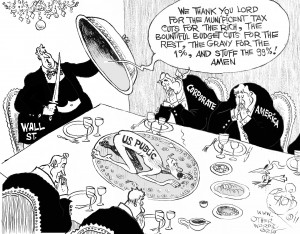 Thanksgiving on Wall Street, an OtherWords cartoon by Khalil Bendib.

A new report by my organization, the Institute for Policy Studies, identifies tax and spending reforms that would not only patch up the holes in our nation’s pants but create a more equitable, green, and secure nation.

First, we need to make sure that Wall Street and the wealthy pay their fair share. Our recommendations are inspired by the decades before the 1980s, when progressive tax rates and investments in infrastructure and education expanded the middle class.

We’ve identified six fair tax reforms that could generate $375 billion per year in new revenue. For example, we recommend raising tax rates on those who make more than $1 million per year and increasing taxes on income from wealth so that the rates are the same as those on income from work. We also call for a small tax (say, 0.25 percent) on trades of stocks, bonds, and derivatives as a way to both generate revenue and discourage the high-risk, high-frequency trading that erodes confidence in the stability of markets.

Second, we need to shrink the Pentagon. Military expenditures account for more than half of federal discretionary spending. While some jobs rely on this spending, a study by economists at the University of Massachusetts has shown that federal investment in education and health care creates more jobs, per dollar, than defense spending.

We make three recommendations that would cut $252 billion in military spending without endangering our national security. We should: 1) End the war in Afghanistan; 2) Reduce the sprawling network of overseas U.S. military bases that were built up during the Cold War era; and 3) Eliminate obsolete military programs. All three of these goals are supported by the majority of Americans.

Finally, we need to stop subsidizing polluters. The Obama administration has promised to eliminate fossil fuel subsidies, and yet U.S. taxpayers are still spending tens of billions of dollars per year on handouts to giant oil and other energy firms. We recommend eliminating this corporate welfare and introducing new taxes on pollution that could generate an estimated $197 billion per year in revenue.

If industries were required to pay the full cost of environmentally harmful practices and products, they would have greater incentive to adopt improved green technologies and reduce our nation’s dependence on oil and other fossil fuels.

Our proposed reforms in these three areas — equity, environment, and security — would raise an estimated $824 billion per year, or $8.24 trillion over a decade. That’s nearly seven times the total savings the congressional “supercommittee” was tasked with identifying in its deficit-reduction plan.

More importantly, these changes would help reshape our society in ways that would make us better prepared for the future.

Sarah Anderson directs the Global Economy Project at the Institute for Policy Studies and is a co-author of America Is Not Broke, a new IPS report available at www.ips-dc.org.
Distributed via OtherWords (OtherWords.org)