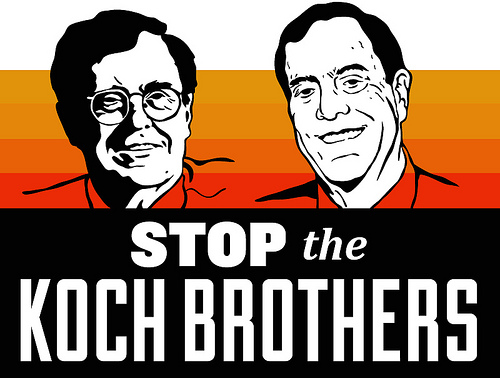 It's time to toss these corporate oligarchs out of the people's business.
By Jim Hightower | May 7, 2014

The gabillionaire Koch brothers feel entitled to occupy the people’s elections, barging in with sacks full of corporate cash. So, how would the brothers feel if the people barged into their political affairs?

To find out, a few citizens recently paid a visit to Koch Companies Public Sector. That’s the grandiose name the brothers give to their Washington, DC, lobbying headquarters.

From there, a covey of high-dollar Koch-headed sapsucker lobbyists flits all around town trying to get lawmakers to take away our Social Security, Medicare, minimum wage, etc. — while also making sure that the two, “free-enterprise” proselytizers keep getting their billion-dollar-a-year package of government subsidies. 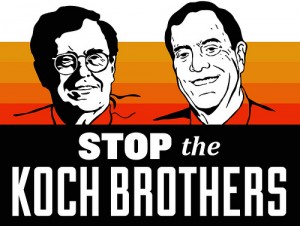 So, some “commoners” came calling on the Kochs. OK, it was more than some — more like 600. They’re affiliated with National People’s Action (NPA), a scrappy, grassroots network of farmers, workers, clergy, retirees, environmentalists, students, and just plain folks.

First, a couple of ministers in the NPA group called on the Kochs to “repent” from their narcissistic political push to pervert our democracy into their privatized plutocracy. Then, several of the out-of-towners gave personal testimony about the real-life impacts that the Kochs’ extremist ideological agenda is having.

Patricia Fuller, for example, told of struggling to make it on Michigan’s $7.40-an-hour minimum wage. She asked why the billionaires would spend millions to try to knock it lower — or, as Charles Koch advocates, scrapping America’s wage floor entirely.

Of course, the visitors were tossed out, but they made their point: It’s time to get these corporate oligarchs out of the people’s business.