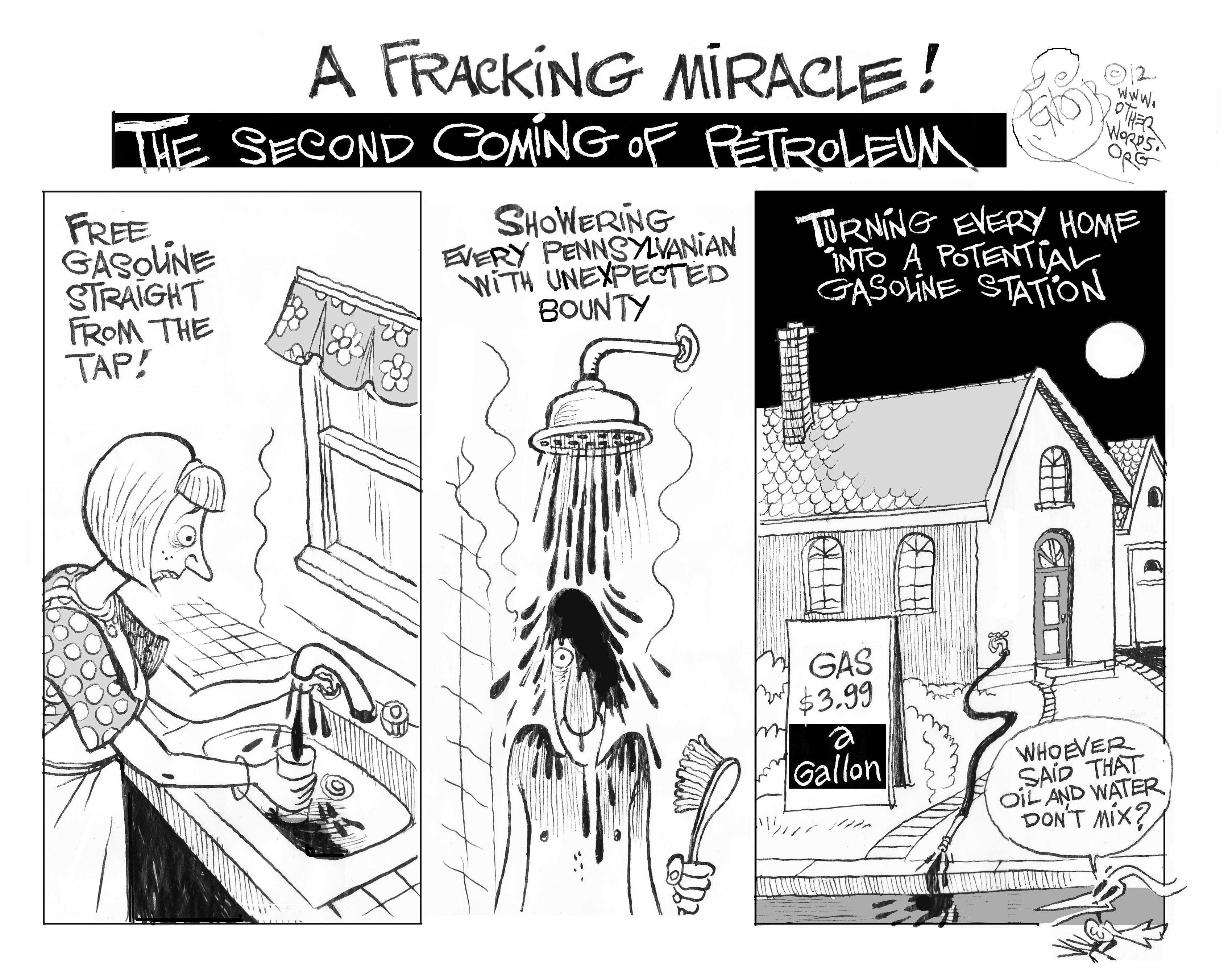 Unless the industry finds some way to safely dispose of the waste caused by fracking, the entire method is a non-starter.
By Andrew Korfhage | January 16, 2012

Add yet another new concern to the growing list of reasons to oppose hyraudlic fracturing, the natural-gas extraction process known as “fracking”: Earthquakes.

With earthquakes previously rare in this northeastern corner of Ohio, seismologists from Columbia University’s Lamont-Doherty Earth Observatory (LDEO) affirmed the likelihood that fracking activities had caused the quakes. Even with the moratorium, they predicted that the current damage would cause more earthquakes in the region for up to a year. 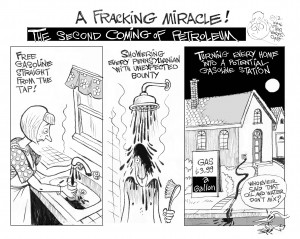 A Fracking Miracle, an OtherWords cartoon by Khalil Bendib.

“You’re pumping this fluid into a crack and the pressure of this fluid is encouraging the fault to slip,” LDEO’s John Armbuster told National Public Radio. “The well has been pumping for a year. It’s going to take a period of time comparable to that for the effects of this pumping to completely dissipate.”

At issue with the quakes is not the gas-extraction process per se, but rather the management of the extraordinary amount of chemical-tainted wastewater left behind. To release natural gas held in rock formations deep within the earth, fracking requires drilling into those formations and blasting open fissures in the rock with injections of chemically treated water and sand — up to 4 million gallons of water and 60,000 gallons of chemicals per single lateral well, according to Scientific American.

As much as 75 percent of this poisoned water returns to the surface, often mixed with radioactive minerals and salt from underground, and must then be disposed of somehow. In Ohio, D&L Energy chose to get rid of this liquid by blasting it back underground again, essentially lubricating pre-existing fault lines within the earth.

Pro-fracking politicians like Ohio governor John Kasich have tried to deflect attention from fracking’s role in the quakes, suggesting that fracking waste isn’t really the industry’s problem. Kasich’s spokesman likened the closing of the wells to “shutting down the auto industry because a scrap tire dump caught fire.”

Given its enormous scale, the industry must find some way to safely dispose of the waste caused by fracking. Otherwise, the entire method is a non-starter. In the absence of the industry taking responsibility for its waste, many states have taken action on their own, requiring fracking companies’ open-air wastewater disposal basins to be lined to prevent leakage, or to be located a certain distance from surface water. But even these precautions can fail. Basins can spill or overflow due to failure of the lining, heavy rainstorms, or even the earthquakes themselves.

Make no mistake, this wastewater has the potential to be extremely dangerous. According to the Endocrine Disruption Network, 25 percent of the chemicals used in fracking can cause cancer. Fifty percent can affect the immune, cardiovascular, and nervous systems. In fact, the dangers posed by fracking wastewater are so potentially huge that a group of U.S. medical experts, meeting at a January 9 conference sponsored by the Mid-Atlantic Center for Children’s Health and the Environment, called for a moratorium on the practice.

They’ve got the right idea.

Ultimately, the Bush-era decision to exempt fracking from adherence to the Clean Water Act needs to be reversed so the federal government can properly regulate this industry.

In the meantime, other states should look to Ohio’s example and start shutting down dirty, costly hydraulic fracturing operations that can not only foul our air and water, and poison our bodies, but can literally make the earth move under our feet.