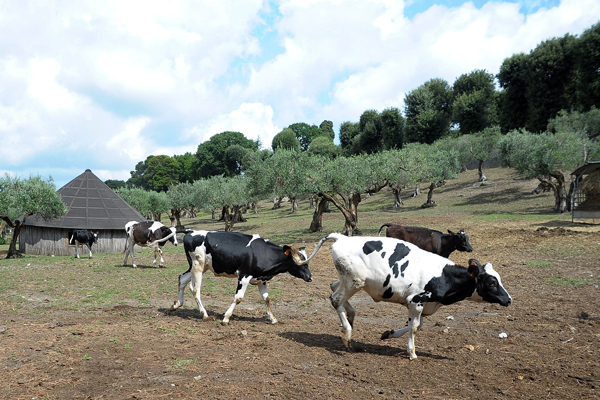 Old McPontiff Had a Farm

Francis is living up to his growing reputation as the "People's Pope."
By Jim Hightower | February 3, 2015

Old songs occasionally need to be refreshed with updated verses.

Who knew that the Pope had a farm?

Well, he does. Fifteen miles outside of Rome, Castel Gandolfo is a 135-acre plot of Paradise on Earth. It features Roman ruins, breathtaking views of the Tyrrhenian Sea, and (of course) a castle.

Since the 1500s, this place has been a summer vacation home for popes. In the 1930s, the Vatican added some bucolic functionality by planting crops and bringing in some farm animals.

And now, Pope Francis, who chose the patron saint of animals as his papal name, has opened the farm to the masses, welcoming us to witness the productive bounty and beauty of nature.

This is no hobby farm, but a sustainable enterprise that delivers a cornucopia of milk, yogurt, veggies, meat, cheese, honey, olive oil, and more to the Vatican every day.

For this pope, however, Castel Gandolfo is also a living metaphor. It personalizes his message that we humans are “stewards, not masters” of nature, and that “access to food is a basic human right that shouldn’t be subject to market speculation.”

He’s been putting the power of his popeship behind religious and governmental policies that promote food justice, provide proper stewardship of natural resources, and combat the causes of climate change — all a part of his overarching call for a moral ethos that rejects “the pride of dominating, possessing, manipulating, exploiting.”

By opening the papal farm to the public, Francis is not only providing a living model of a sustainable food system. He’s also extending his pastoral ideals of humility and openness.

This guy is living up to his growing reputation as the “People’s Pope.”