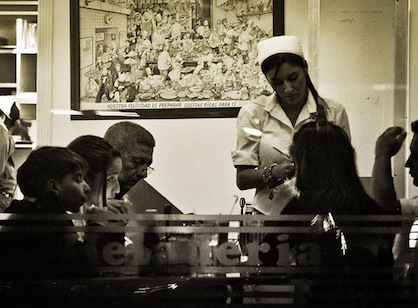 The nation's largest full-service restaurant chain is sending three top executives off with $68 million while paying workers $2.13 per hour.
By Sarah Anderson | October 8, 2014

Imagine the Three Stooges as waiters. Curly’s pouring hot soup in laps, Moe’s sneezing in the spaghetti, and Larry’s lighting a well-coiffed woman’s hair on fire with the bananas flambé.

When their boss finally gives them the boot, the customers cheer. And if the wiseguys were to ask for big goodbye bonuses, everyone in the joint would crack up.

But that’s not how the story turns out for under-performing personnel at the very top of the restaurant industry ladder. In late July, Darden Restaurant Group — the company that owns Olive Garden, LongHorn Steakhouse, and numerous other chain eateries —announced plans to usher their CEO out the door.

After years of sluggish sales, investors cheered the move, immediately driving up the price of the company’s stock by almost 5 percent.

In this case, however, nobody seems to have laughed when the spurned employee requested a big bonus. In fact, Darden CEO Clarence Otis Jr. will walk away with compensation and retirement funds worth an estimated $36 million.

Under investor pressure, the Darden board has pushed out two other top officials over the past year as well. Altogether, the three executives are sailing off with combined compensation valued at an estimated $68 million, according to a report I authored for the Institute for Policy Studies. On top of cash, stock, and generous retirement funds, they reaped various fringe benefits like financial counseling and discounts on their company cars.

Surely the Three Stooges wouldn’t have deserved a pile of loot for their abominable service. So why would Darden richly reward Otis and the other two ousted executives for a job badly done?

For the vast majority of servers working in its full-service chain restaurants, gold-plated perks are unimaginable. Darden pays at least 20 percent of its hourly workforce no more than the federal minimum wage for tipped workers. That subminimum wage has been stuck at $2.13 for more than 20 years.

Employers are supposed to make up the difference if their employees’ total pay (tips plus wages) doesn’t add up to at least the federal minimum wage of $7.25 per hour. Because of lack of enforcement, however, noncompliance runs rampant.

Darden does offer most employees a 401(k) retirement plan. But 87 percent of those eligible (including management and administrative staff) choose not to participate. With such small paychecks, it’s nearly impossible to put money aside for retirement.

Currently, Darden workers face even greater insecurity. An activist hedge fund, Starboard Value, is battling over control of the company and pushing for deep cost-cutting, including on labor.

Squeezing workers to the bone is no recipe for success. But paying a living wage would be.

According to research by the Restaurant Opportunities Centers United, states that have raised their minimum wage for tipped workers above the federal floor have had above-average employment growth and increases in per capita restaurant sales.

As the country’s largest full-service restaurant corporation, Darden plays a major role in setting national industry standards. And now, in the midst of a bitter shareholder fight, it has a decision to make. Will it tighten the vice on workers or will it change course and follow a high road approach to prosperity?

Sarah Anderson directs the Global Economy Project at the Institute for Policy Studies and is the author of the new report Darden’s Golden Goodbyes. IPS-dc.org
Distributed via OtherWords.org