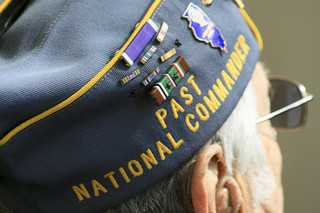 On Tax Day, Consider the Hidden Costs of War

The benefits Uncle Sam pays out to Vietnam veterans continue to rise.
By David Elliot | April 10, 2013

April 15 isn’t just Tax Day. It’s also known as the Global Day of Action on Military Spending. People around the world mark the occasion by protesting the vast resources allocated to militaries, often at the cost of human needs.

According to a new report issued by the National Priorities Project, of every tax dollar the federal government collects, 26.5 cents goes to the Pentagon one way or another. By comparison, a single penny goes to science, 1.4 cents to transportation, 2.1 cents to energy and the environment, and 3.5 cents to education.

That means of every tax dollar, just 8 cents gets channeled into those four important categories. Combined, it’s less than one third of the total revenue the Pentagon absorbs.

One notable reason the Pentagon soaks up so much of our federal budget is its exorbitant weapon systems. Take the F-35 Joint Strike Fighter. A decade after parts manufacturing for this boondoggle first began, it’s still not deployed. Experts say that by the time it’s been operable for a few decades, the F-35 will have cost us somewhere in the neighborhood of $1.5 trillion to build, fix, maintain, and fix again.

There are many hidden Pentagon costs as well.

Did you know that the government spends $40 billion each year caring for our veterans and their surviving family members? A recent Associated Press investigative report revealed just how much we are paying for wars fought generations ago — and foreshadows how much we will still be paying generations from now.

Remarkably, we still pay out benefits to family members of World War I veterans. In a few isolated cases, family members of veterans of the Spanish-American War and Civil War are still collecting payments too.

The benefits Uncle Sam pays out to Vietnam veterans continue to rise, even though that conflict ended some four decades ago. Today we pay $22 billion a year to these vets and their families. By comparison, we pay a little more than half of that, $12 billion annually, to veterans and their family members who served in either of the Iraq conflicts or Afghanistan.

The Vietnam War (and World War II, for that matter) serves as a warning when we try to assess not just the current but the future expenses tied to the Iraq and Afghanistan conflicts. World War II ended 68 years ago, yet it continues to cost taxpayers $5 billion a year. The cost of the benefits paid to its veterans didn’t peak until 1991, the AP reported.

Remarkably, the Vietnam War’s costs, unlike those for World War II, are still rising. The benefits paid to its veterans and their family members stand at $270 billion since 1970. Using World War II and Vietnam as yardsticks, we can probably expect the government-paid health care costs of the wars in Afghanistan and Iraq to rise for another four decades or so before they peak, probably between 2050 and 2060. We’ve already paid more than $50 billion since 2003.

No one denies that our veterans and their family members deserve it. We put them in harm’s way and they fought and sacrificed their limbs — and all too often their lives. These benefits aren’t Pentagon pork. They’re a cost of war.

This Tax Day, knowing that a quarter of the money we are paying to the federal government will go to the Pentagon, we should be aware of this cost of war — wars past, wars present, and wars still to be fought.

For many reasons, we should stop waging so many wars. And we should demand that we stop paying for the things we can’t afford — such as obsolete and antiquated weapons systems — so that we can afford the things we need. That includes health care and survivors benefits for those who have sacrificed.

David Elliot is communications director of USAction. He edited the report Peace of Mind: Americans Share Their Medicare and Medicaid Stories. USaction.org
Distributed via OtherWords (OtherWords.org