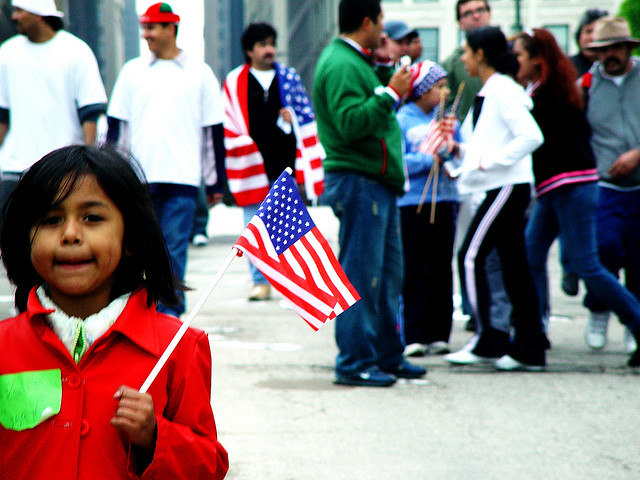 We should be able to debate immigration policy without calling people "animals" or disparaging the poor.
By Jill Richardson | May 23, 2018

That is, any human, no matter who they are or what they’re like, has worth simply because they’re human. On some basic level, all of us are equal and precious.

That’s why many of us would save a human from a burning building before we’d try to save a dog. And why we’d go to extreme lengths to save the human if it’s at all possible.

Or at least, I like to think most of us wouldn’t. Apparently, though, some of us would.

I’ve been deeply uneasy with some trends that seem to rank some people as more valuable and others as less. One of them is the idea that immigration should be based on “merit.”

What does merit mean? Merit as a human being?

What’s actually meant by proposals to allow immigration based solely on “merit” is that only the wealthiest and most educated people can come to the U.S.

Calling that “merit” implies that one’s worth as a human is dictated by their wealth and education. I don’t believe that’s true. I believe the poorest and most destitute refugee has equal worth to the wealthiest billionaire.

Beyond their intrinsic worth, immigrants who lack money and education make tremendous contributions. Not least, they put food on America’s tables.

Immigration crackdowns in Alabama, Georgia, and California led to crops rotting in the field when undocumented immigrants were unavailable to pick them, and nobody documented was willing to do the job under the pay and working conditions being offered.

An even more troubling devaluation of human life was Trump’s assertion that Central American gang members are “violent animals.”

Obviously, few of us would defend or invite members of a violent gang into the United States. The problem here is that Trump has routinely tried to associate all immigrants — and particularly those from Latin America — with criminality.

He’s done this from when he first entered office, when he created a phone line for people to use to report crimes by immigrants.

First of all, we don’t need a phone line for that. We already have a phone line. It’s called 911. Or, in a non-emergency, you report crimes to your local police.

Third, and most troublingly, calling human beings animals is one of the steps toward genocide. (Specifically, according to Greg Stanton of Genocide Watch, it’s step three: dehumanization.)

Nobody, even the Nazis, began with concentration camps. They began by creating an idea of us vs. them, dehumanizing Jews by calling them “rats,” and then gradually more extreme steps like forbidding intermarriage or forcing Jews into a ghetto.

Let’s not go there. Immigrants have an intrinsic worth as human beings. We can debate how many people to let into the country, how best to do it, or what sensible precautions to take.

But whatever we do, our immigration policy — and our politics — should recognize every person’s common humanity.